One of my favorite figures of the 19th century urban renewal and nature conservation is Frederick Law Olmsted. His head office Fairsted, located in Brookline, MA, is a lesser known National Historic Site, and he is most famous as the founder of American landscape architecture and the chief designer of New York City’s Central Park. Olmsted’s idea of a metropark was different from the highly cultivated gardens of Europe and Britain. He wanted his city parks to be easily accessible by all people from multiple points, but have the feeling like one has just stepped into a remote, but protected wilderness. Kolomenskoye is a city park in the southern part of Moscow that reminds me the most of Olmsted’s vision, for it is accessible but not overly cultivated, wild but well kept enough to let the little ones roam freely.

Olmsted emphasized that the design of a park, once executed, takes on a natural life of its own not usually in keeping with the original intent:

What architect so noble…as he who, with far-reaching conception of beauty, in designing power, sketches the outlines, writes the colors, becomes the builder and directs the shadows of a picture so great that Nature shall be employed upon it for generations, before the work he arranged for her shall realize his intentions.

This is very much the case with Kolomenskoye, as it began, like so many other Moscow Metroparks as a private royal residence for the Tsar. Long before Moscow became a megacity, Kolomenskoye was still a rural area on the outskirts. As recently as 1960, it joined the city proper as it was swallowed up by the urban sprawl and became the dwelling place for all people as it remains today.

For us, it is the most visited of three local parks, for it has everything: natural wonders, beautiful gardens, royal museums, active churches, venerable graveyards, delicious cafes, creative playgrounds, and a grand panoramic view of the Moscow River. It is like a microcosm of Russia, and we always discover something new there that we have never seen before.

Church of the Ascension 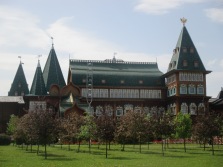 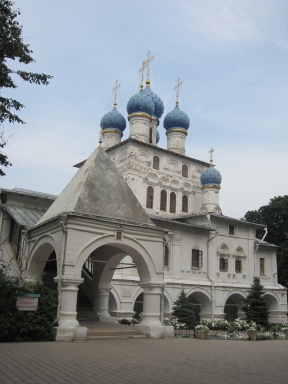 Church of Our Lady of Kazan

Museum of Tsar Peter I 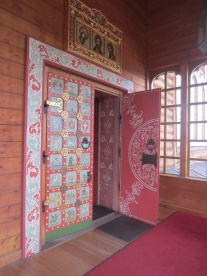