I used to say that Boston was the most European city in North America. That was until I visited Montreal, Quebec, our neighbors to the north in Canada. Now I claim Boston’s most European status only for America. Ah, Montreal. What an elegant, cultured, and beautiful city. It was the perfect place to debut music from the Boston Byzantine Choir’s sixth CD, Twelve Days, set to come out before the 25th of this month (watch this blog for the official announcement). Our concert as advertised previously was entitled East Meets West and combined the music of our choir with the more western pieces played and sung by the choir of our host, St. George Antiochian Orthodox Cathedral.

The concert lived up to its promises as Eastern chant blended with more familiar Western carols and choruses. The cathedral choir director Paul Jabara and our own director have so much in common in terms of charisma and dedication to excellence. The most inspired word came from Charlie Marge who encouraged the audience, “If you want to know the faith of the church, pray and sing the divine services. If you want to deepen that faith further, learn how to compose music for these ancient, yet timeless hymns.” Our composer and Charlie’s chief collaborator on this project, Dr. Jessica Suchi-Pulalis, who attended the concert could not agree more adamantly. Here is just one sample of the Western music selected: 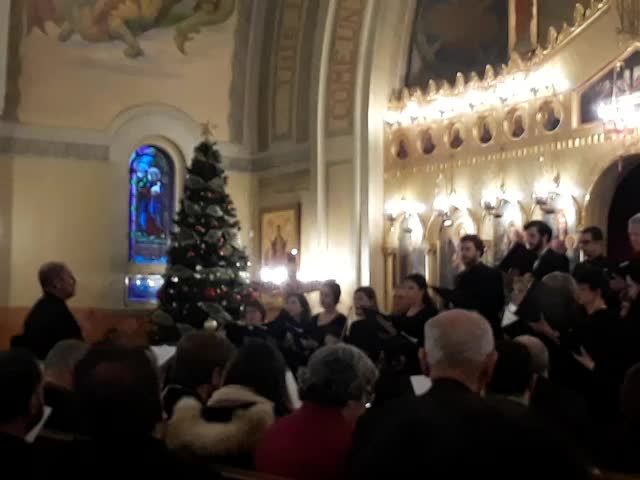 And for the Eastern half, you will just have to wait to hear the CD (I could not record what I was singing in myself). Blessed Advent to all as we await the coming in human flesh of the Only Begotten Son of God in His Nativity!