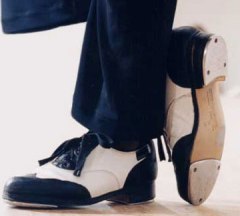 When I first came to Boston several decades ago, I was a newly minted college grad sent on a mission to enlighten the world with my presumed wisdom. In fact, one of the ways I hoped to make my living teaching others with something I thought I knew well was through tap dancing. Growing up in a podunk town in the Midwest, I nevertheless somehow managed to receive instruction in the modern art and rose to a level I felt was proficient enough to make me a teacher. Do not presume to be teachers, my brethren, for the man who thinks he knows something does not yet know as he ought to know.

Witnessing just one dance school in this world class city of Boston was enough to disabuse me of my dancing delusions, and not only did I fail at becoming a teacher of tap, I determined it was necessary to become a student again, for I realized that after 10+ years of instruction, I was only beginning to learn how to hoof. For the first time in my life, I learned what I now call the Orthodox way of tap dancing, not merely the memorizing of a sequence of steps, patterns and rhythms but the receiving of a tradition, a personal transmission of groove passed down from teacher to teacher all the way back to when tap first began. “And the steps you have seen me perform in the presence of many students, entrust to reliable people who will also be qualified to teach others,” you could almost hear the teacher say. In the 1989 movie Tap, the Sammie Davis Jr. character sums up the difference for his young protege played by Gregory Hines, “This here ain’t just 5-6-7-8, lah-di-dah.” It involves the soul, a more holistic approach that spills over into one’s life.

I remember vividly how our particular instructor passed down one combination to us. It didn’t just have a name, but it had a lineage. It was Dianne Walker’s step, so we couldn’t just do it any ‘ole way; we had to do it the way Dianne Walker would do it. When our teacher felt like we had mastered the way sufficiently, she congratulated us, “There you are. Now you have a piece of Dianne Walker in your back pocket. You can pull her out whenever you feel like performing that step.”

Being a true Christian and following in the footsteps of the saints is a lot like learning how to hoof from the masters. It is not enough just to outwardly mimic what the great saints and ascetics have accomplished. We must first humble down, realize our true state of soul, and maybe learn just one small step of theirs before moving on to loftier heights. I don’t know what became of my tap teacher, but I am humbled that my daughters are now fortunate enough to take dance from instructors who are actually Orthodox Christians. In fact, the Kosmos Dance Company is almost entirely Orthodox from the teachers down to the students, and their Christmas recital tonight continues to prove for me that Orthodoxy unleashes an amazing creative force because the humility of the performers keeps the ego from getting in the way of perfecting the art.

I was a good dancer when I first came to Boston. But the Church has given my children the chance to become great dancers by not thinking of themselves more highly than they ought and by entering into the tradition of the great dancers before them. Then by turning and turning until we all come round right, true simplicity and greatness can be simultaneously gained.