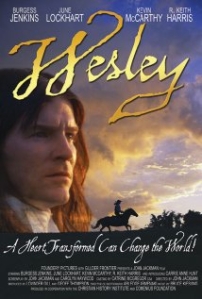 Saw a movie the other night that finally satisfied my urge for faith-based film that was not overly contrived, pietistic, or filled with obvious moralizing and revivalist preachers not so cleverly disguised as deep and thoughtful people of the world. Perhaps because this was already a story about a revivalist preacher, the director did not feel like he had to make him into anything than he already was.

Rich in historical detail and an engaging story, Wesley tells the tale of the famous 18th century reformer John Wesley and his brother Charles, who became a voice of change in the Church of England both in Old and New England.

Though the setting and cinematography are admittedly low-budget, the strong story line and chemistry between the brothers drives the movie into many thoughtful moments. John is not just a two dimensional religious figure who is always cock sure of himself and never wavering in his faith in God. Both a potential love interest and his brother Charles’ unflagging brotherly admonishment keep the character of Wesley real and human. My favorite scenes in the whole movie comes at the end after he has formed his Methodist Society within the Church of England and he rides miles about the country as an itinerant preacher.

It is the very mission of this blog to promote Christian truth and witness in this way, outside the established walls of the cloister and into the streets where the people are. Not to negate the cloister, as many reformers did, for it is a needed place of refreshment and spiritual revival (we go there many times ourselves as a family). But we ought neither to get comfortable and entrenched behind the walls of an established Orthodoxy and forget the chief apostolic call to “Go ye forth into all the world and preach the gospel!”