In honor of the 20th anniversary of the priesthood of Fr. Antony Hughes at St. Mary Orthodox Church in Cambridge, the 20th anniversary of the Boston Byzantine Choir, and incidentally also the 20th year of my being an Orthodox Christian, I would like to present this memory of Fr. Antony from the very beginning of his ministry and the very beginning of my walk as an Orthodox Christian. We remembered so many of these tonight at a special banquet in his honor at St. Mary’s…

No one warned me that it would be as rough as it was when I finally become Orthodox and was chrismated into the Church on Lazarus Saturday in the spring of 1993. After all, I had been making the rounds to so many churches (at least 15 different ones) by that time in my life, what was one more church? But the richness and tradition of the faith which was once for all delivered to the saints is not just another church.

And the summer following my reception into Orthodoxy, the initial honeymoon with my new-found faith was wearing off as the culture shock was setting in. That summer of ’94 I served at the Antiochian Village, the main camp of the Antiochian Orthodox Archdiocese in Ligonier, PA as a camp counselor, and it was the chance of a lifetime for me. I was eager to immerse myself in all that the Church had to teach me: sit at the feet of great teachers, study in the ample Orthodox library, but most of all, learn how to sing and pray the prayers of Mother Church. I knew that at the Village, I would be able to hear and sing the chants in English, some of them for the first time in my native tongue. What I did not count on was how difficult it would be for me to absorb their complexity, to feel their depth, and finally to sing them in a full-bodied, devotional way. 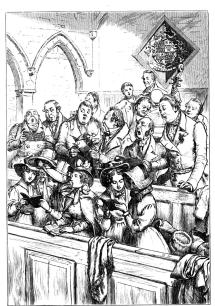 The heritage of congregational singing in the Protestant churches in which I grew up would not accept anything less than this. I had to learn all the verses by heart, or why bother singing any of them at all. But so many new things kept me reeling in the unfamiliarity of it all. I wanted to connect to my new-found faith in a deep way, but all I could do was walk around humming favorite Protestant hymns.

I had heard that one of the priests assigned that summer at the camp was a convert to Orthodoxy who had graduated from Oral Roberts University. I thought to myself, “If anyone could understand my dilemma, it would be him.” So I took him aside one evening to confess my struggle. Fr. Antony Hughes not only had a Protestant background, but he had also been recently assigned to a parish near Boston, a city where I was heading for the first time to teach that following fall.

I shared with Fr. Antony my loneliness, how I felt like I was the only American Christian in a sea of Palestinian flags, camel necklaces, and kibbeh-loving counselors. I was worried that I was singing too many Protestant hymns to myself, in communion with a spiritual life that was much closer to me at the time. Was I uttering heresy? I asked him, “Now that I have become Orthodox, do I have to give all of this stuff up?” He looked at me with that disarming, hobbit-like charm of his and replied, “Aaron, if you gave all of that up, you wouldn’t have anything left. Just give yourself and the Church time to sort through all of these things. Everything from your life as a Christian before Orthodoxy will eventually find its proper place.”

And did it ever. Little did I know then how true his words would become. For the Boston Byzantine Choir that he had helped to form at his parish just a year prior would become for me one of my chief instructors in the music of the Church since the late 90’s when I joined its ranks. Now 20 years and 5 CD’s later, we are only just beginning to plumb the depths of the Liturgical well of eternal life.

Many years to you, Father Antony! Congratulations to Charles Marge, director of the choir! Thanks to all my fellow choir members for putting up with my quirkiness all these years. And above all, glory be to the life-giving Creator and sustainer of us all who by His Holy Spirit gives to all the breath to praise His holy name. Now and forever and unto the ages of ages, Amen.

2 thoughts on “What I Gave Up to Become Orthodox”