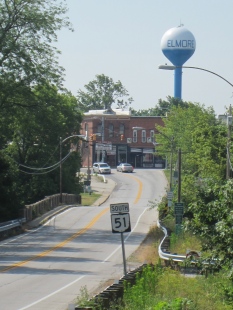 No, I cannot forget where it is that I come from
I cannot forget the people who love me
Yeah, I can be myself here in this small town
And people let me be just what I want to be.

I never understood my friends who always dreamed of leaving the small town where I grew up. Did they honestly think that a change of scenery, a bigger city with more opportunity would change their identity? I personally never wanted to leave my small town. But like Abraham, circumstances prevailed against my better judgment and I was driven from my people and sent to a land that would be shown to me. From the land of my fathers, I came first to Boston where I could more deeply discover the land of holy Orthodoxy.

My wife was born in a small town in Russia and grew up in a small city where we are visiting presently. She was baptized by a believing Baba in that same small town, and when she came of age, she journeyed from that small town to study in America and learn English. Neither one of our small  towns amount to much in themselves. Unlike Boston which boasts of innumerable historical firsts, nothing much happened of great renown in Elmore or Surgut. But a town or small city with not much to boast of paradoxically produces the most magnanimous of people, and we are meeting them every day here during our visit.

Surgut like Elmore is situated in the center of the country. Flat and swampy, the climate produces relatively little precipitation annually. During our stay, it has been unseasonably warm, for usually at this time of the year the copious amount of snow is still melting. A land of reindeer which is herded by a nomadic people called Khanty, the 420 year old town may have continued to be a small town were it not for the discovery of oil and natural gas in the middle of the 20th century. That discovery and the mining industry that came with it swelled the ranks of its inhabitants to the current population of just over 300,000, about half the size of Boston proper. It is a young city with everything a young family could wish for all within a relatively short distance.

But what strikes me the most is the similarity in the manner of the people I grew up with. Unlike the pretension of either Moscow or Boston, here life happens at a much more natural pace. My wife’s family and even many of her classmates still live here and keep in touch with one another. I asked one of them how they found it living here, and he expressed a wish to keep the city but exchange the harsh winter climate for something closer to southern California. But my wife and I both agreed that a different climate would make Surgut an entirely different city.

For real, genuine people like the ones living here are not produced under ideal circumstances. Rather, they prevail, like the early American pioneers, despite adverse situations to become great souls and people with hearts of gold.