May, 1, 2016
The Bright & Saving Pascha of Christ
the Lord Who Rose from the Dead
Trampling down Death by Death

No parable in Scripture proves a greater challenge to notions of human justice than that of the Workers in the Vineyard. In the story, those who come to work at the eleventh hour receive the same generous portion from the Master of the Vineyard as those who have labored from the beginning of the day. The only rationale given is the right of the master to do as he pleases with his wealth.

The Paschal Homily preached tonight in churches worldwide features this coming at the eleventh hour as the rich invitation of the Master and Lord of the heavenly vineyard towards the whole human race, especially to those who are least deserving of it. What can account for this reckless extravagance on the part of Our Lord and Master?

We might react the same way as the keeper of the money bags when the woman caught in many shameless sins emptied an entire jar of precious myrrh on the feet of the Lord. Inwardly, we might grumble to ourselves, “Who let these kind of people into the feast? Does the Lord of Glory not possess any dignity or standards of right behavior that he fails to rebuke such an outrageous waste, such egregious delay and lack of punctuality? Indeed, what ever happened to the idea of too little, too late?”

But we who witness the thunderous power of this Feast of All Feasts will miss the point if we judge by mere human justice and do not understand divine love. Consider the ultimate person to arrive at the eleventh hour: the repentant thief Dimas who was crucified on the right of the Lord. Because of just one prayer offered in faith, he became the first to taste paradise! Even the Lord’s cousin, the Great Baptist and Forerunner John took second place to this convicted criminal.

And who are we that judge by mere appearances? What is our story of how we came to such a feast: Brothers and sisters, think of what you were when you were called. Not many of you were wise by human standards; not many were influential; not many were of noble birth. But God chose the foolish things of the world to shame the wise; God chose the weak things of the world to shame the strong. God chose the lowly things of this world and the despised things—and the things that are not—to nullify the things that are, so that no one may boast before him. (I Corinthians 1:26-28) And so when Love itself bids us welcome, it is no surprise that we too may have delayed in responding. But it is no great matter; for if the Lord Jesus Christ can transform the likes of such sinful humanity into beautiful inhabitants of his Kingdom, surely he can fit even us latecomers in. For He it is that not only invites but gives the power to accept the invitation:

LOVE bade me welcome; yet my soul drew back,
Guilty of dust and sin.
But quick-eyed Love, observing me grow slack 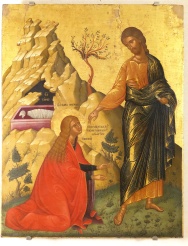 From my first entrance in,
Drew nearer to me, sweetly questioning
If I lack’d anything.