Almighty God, you alone can bring into order the unruly wills and affections of sinners: Grant your people grace to love what you command and desire what you promise; that, among the swift and varied changes of the world, our hearts may surely there be fixed where true joys are to be found; through Jesus Christ our Lord, who lives and reigns with you and the Holy Spirit, one God, now and for ever. Amen.

I could not believe my ears. When I had just begun college, my Pastor at the time was telling me that the music I then desired, the tunes which were my life blood would very soon grow old and seem trite to me. In other words, I was made for something more refined, more subtle, and significantly deeper in both content and form.

Up to that point in my life, I argued vehemently that the Gospel content could be and should be inserted into a variety of contemporary forms and that these forms had little to no impact on the essential message. This Pastor contended otherwise, that medium and message were not only inseparable but mutually co-inherent. And as I went on to college I found that he was right: As I developed my taste for more refined forms of music, the newer, more sentimental forms seemed less and less powerful. Through deliberate change of habit, I was growing up in my faith and acquiring a deeper love.

A new book by Calvin College professor James K. A. Smith explores this vital connection between form and content and the importance of deliberately cultivating habits that will fix our hearts where “true joys are to be found.” In You Are What You Love, Dr. Smith delivers a much needed tonic to the often acerbic worship wars raging in some Evangelical churches. His tonic is described as developing a pedagogy of desire: learning how to exegete not just ancient texts, but everyday experiences like trips to the shopping mall, planning an unforgettable wedding, and taking in a soul-profiting movie. This good philosopher teaches how ordinary things we do have the power to become rival liturgies, forming us in ways contrary to the liturgy of the Kingdom of Heaven. Here is how he defines his terms: 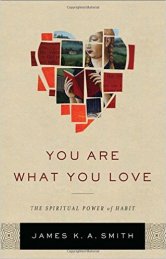 “Liturgy” as I’m using the word, is a shorthand term for those rituals that are loaded with an ultimate Story about who we are and what we’re for. They carry within them a kind of ultimate orientation. To return to our metaphor above, think of these liturgies as calibration technologies: they bend the needle of our hearts. But when such liturgies are disordered, aimed at rival kingdoms, they are pointing us away from our magnetic north in Christ. Our loves and longings are steered wrong, not because we’ve been hoodwinked by bad ideas, but because we’ve been immersed in de-formative liturgies and not realized it. (p. 46-47)

With this new exegetical tool, he begins to probe deeper into the problem of contemporary worship patterns and their underlying assumptions that form does not matter as much as substance. In fact, he argues, there are some Christians who try so hard to have a contemporary form that they unwittingly undermine the Gospel message they are trying to preach. Hear his description of the youth group space set up in many modern churches:

You walk into a kind of loft space that combines various elements of an arcade, a coffee shop, a dance club, and a family rec room. The room is dripping with energy, an unrelenting sense of scripted happiness that is synonymous with being “upbeat”– even while trying to communicate that this is a place where young people can “chill.” Above all, it is trying very hard to be a place where young people want to be… 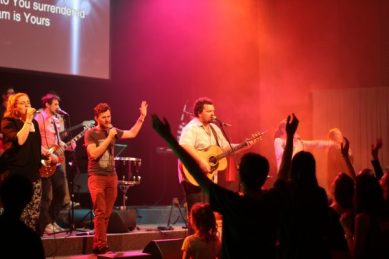 [Next the program begins]. This program is their substitute “service.”… A raucous rock band takes center stage, a routine widely familiar from concerts and music clubs. The band leads the group through a rousing set of triumphant praise songs and then into a quiet set of introspective, heartfelt, eyes-closed, hands-raised meditations. Whatever spell has been cast, however, is largely broken by an abrupt change of gears when a comedy troupe comes onstage to lighten the mood and let everyone know that following Jesus can be fun…

[Eventually some light scriptural message is given]. Having been fed a vaguely biblical message, though in a more palatable package– kind of like choking down medicine hidden inside a piece of candy– the young people are dismissed with promises of more fun next weekend. (p. 143-44)

His analysis of the deficiency in this usual pattern made me weep because it could have been a page from my own biography as I grew up and discovered older and deeper forms of worship that did not compete with the message they were delivering:

When you have only seen forms of piety that value spontaneous expression and cliched sincerity, to be given the cadences and rhythms of the Book of Common Prayer can be like receiving the gift of tongues. (p. 147)

Indeed, this was the gift prophesied and fulfilled for me by my pastor so long ago. Except now besides Anglican prayers, my prayer life also consists in chants that are centuries old and in languages other than English. It is the ancient future that alone has the power to point the human heart toward joy-giving life, and my hungry soul will be forever grateful for these good professors and pastoral way-showers.

2 thoughts on “Fixing Our Hearts on True Worship”