On this day when we remember the Great-martyr Demetrius of Thessaloniki, I offer this re-post of a reflection I composed the summer of 2011 when I was fortunate enough to visit the city of the saint and venerate his relics along with the rest of the senior class of Holy Cross Greek Orthodox School of Theology. A full copy of all of my reflections from that summer can be found here.

So far in our time in Thessaloniki we have struggled through long-winded, mandatory excursions to ancient sites but have failed, for the most part, to grasp the significance of each place or to remember them. For memory is bound up with connection, relevance and identity, and our poor and rootless American enculturation makes us ill prepared for such depth. Later excursions about more recent saints give us a better window into the past and an aid to our memory.

One Sunday, we go on an optional pilgrimage to the Monastery of St. John the Theologian in Souroti where Elder Paisios the New of Mount Athos is buried. This non-mandatory excursion brings almost as many pilgrims as the mandatory ones. When given the choice, our group has most often opted for visits to monasteries where the living faith has the power to connect us to ancient realities.

Here at the final resting place of Elder Paisios, the living link to ancient wisdom is
preserved. We wait in a long line under the punishing heat of the mid-day Mediterranean sun for a chance to kneel and kiss the grave stone of a man who has loved so many so deeply. I remember personally how the elder’s writings were my own initial introduction to modern Greek elders. Because his repose was so recent (+1994), his teachings and those of his sainted intercessor Arsenios of Cappadocia (+1924) have not only a contemporary flavor but allow us a chance to see beyond our own modern disconnect with the past. 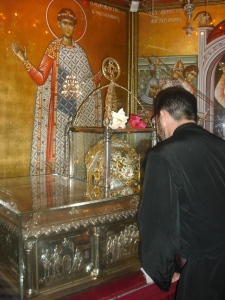 Relics of the Saint

Through Paisios the New and St. Arsenios of Cappadocia, we see back to St.
Demetrios the Myrrh-Gusher of Thessaloniki, whose relics and intercession remain very much alive to this day. The multiple translations of his relics is a story even greater than the earthly life of this great warrior saint. Six different times the saint’s bones were moved— sometimes cast side, sometimes reverently enshrined, more recently stolen by Crusaders and taken westward to Venice for hundreds of years. But for all of these occasions, the Church uses the same word to describe the event, translation, merely to report the act of moving the relics without casting judgment on the movers. For the Church recognizes that the saint himself is an actor in the move, even a director of the drama. The translators take or discard his relics out of a variety of motives— some moved by extreme love, some by desire to steal something precious, and some by jealousy of something too powerful for them to handle. But regardless of the human motives, it is clear from the lives of other saints through their relics that a saint’s reliquary does not move unless the saint desires it.

So this leads us beyond the obvious questions about the Crusader’s motives for taking the relics to Venice to the less obvious motives of the saint for wanting to go to Venice. For his relics remained there from the time they were translated in 1202 until just recently. What then was St. Demetrios doing all of that time in what we call the West, what we Orthodox dismiss as the West, what we sometimes deride, ridicule, and ignore as THE WEST? Yes, the saint was eventually found and returned in 1978 to his basilica in Thessaloniki, but why not sooner? Could it be that the saints ignore our neat geographical distinctions and separations of East and West and see past our narrow minded nationalisms? With such questions, St. Demetrios appears to be a much bigger saint than we make him out to be.

But how does all of this connect us with a place as ancient as Dion in Pieria at the foot of Mt. Olympus, the legendary home of the 12 gods of the Greek Pantheon? In our program so far, we have tended to start with tours to ancient sites and gradually work our way to more modern ones, but I am beginning to think we should reverse the order: to begin with a modern elder like Paisios, move to the more recent Christian past with St. Demetrios, and then visit places like Dion. Through the lens of the modern elder Paisios, our view of past paganism is contextualized. Without this lens, our return to past heritage can become dry like toast, lifeless and artificially reconstructed.

So what of Dion in Pieria? At first glance, it appears as nothing more than another
archeological treasure trove at the base of a famous mythological mountain, complete with ancient toilet seats and beautiful tile floors. But if we wish to go beyond the gee-whiz reaction, a little more mythology, provided by our capable tour guide, is necessary. Dion is a fertile plain and home to an emerging river that according to mythology didn’t used to flow there. The present river Baphyras emerges from underground springs which continue to bubble up. Mythology tells us that the river came from the moment when Thracian Maenads who murdered the beloved singer Orpheus wanted to wash their hands in the Helikon River. The river, wishing to be a source of healing and not a sanction for violence and bloodshed, plunged itself into the earth and emerged at the foot of Olympus at Dion. The emerging river and hot springs at Dion provided more than just a natural septic system and place for physical hygiene. Dion became, in the centuries before Christ, a hospital for healing as are all places where purifying water is present. Original Burial Crypt of the Saint

The connection of these ancient ruins to the present can be traced through this theme of water and healing. St. Demetrios is loved by so many because the constant stream of myrrh from his relics have brought many to wholeness. St. Arsenios of Cappadocia provided a kind of hospital for his faithful flock in Farasa where Muslim and Christian alike were healed by God, and healings from holy water and the veneration of his relics at Souroti still occur to this day.

This holy water, ancient, medieval and modern, connects us to our living Hellenic heritage
by watering our minds with the illumination of the Holy Spirit. Without divine influence, our
excursions, our archeology, our attempts at enlivening historical imagination all fall into
dead and disconnected pieces.