I had the distinct privilege and honor to chant the vigil tonight at my home parish, and as I was singing the hymns of preparation for the weekly celebration of the resurrection on Sunday, I was reminded of a post that has been brewing for a while in my heart. Our eccelsiarch (head chanter who arranges the service schedule) recently redid one of our key service books which was in sore need of repair. He painstakingly removed the well-loved pages of a prayer book published in 1988 and inserted them, one by one, into sheet protectors and a three ring binder that now consolidates two service books into one. Seeing the highly used pages reinvigorated with new life reminded me of a time long ago when my opinionated self learned a lesson about the true purpose of a prayer book…

I was a new convert to the Orthodox Church and newly arrived to the Boston area in the early nineties, but that did not stop me from thinking I knew better than almost anybody about how to pray in Church. I was infected with the type of zeal that only crazy converts can know, the zeal that wishes to somehow improve upon a 2000 year old tradition. My buddy and I decided to attend a nearby vigil of an Orthodox Church about which we had heard so many good things.

The Church lived up to its reputation, as the priest liturgized like an angel, with great clarity and heart. He even allowed us as visitors to chant a few parts of the service, since most of it was somewhat familiar. As I did, one book stood out to me in particular. It was an old, loved Psalter, which contained an English translation that was unfamiliar to me. But rather than bask in the radiance of those worn and deeply loved pages, only one question burned in my mind that I hoped to ask Father after the service. I was concerned, in my crazy convert zeal, about translations that departed from the ones in standard usage by the Church. I was weary then of always seeming to hear a different English translation every time I went to a new church; I wanted uniformity and simplicity in the prayer services, so that I could begin to wrap my mind and heart around them.

When the vigil had concluded, and we had thanked batiushka (term of endearment for priests in Russian meaning “little father”) for his hospitality, I piped up with my concern about the Psalter and its rogue translation. The soft-spoken, elderly priest only shuffled his feet, thought for a few moments, and then mumbled a response that completely reoriented my attitude towards prayer books, Bibles and their English translations. He said, “Well, I suppose the most important thing about a prayer book is… that it is prayed.” 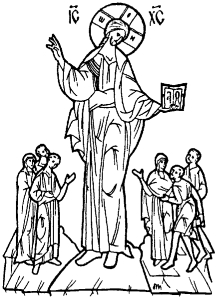 In a word, all of my pretensions toward philological precision came crumbling into dust at the feet of a much higher principle, and it reminded me of why I became Orthodox. The Bible is not principally a book of mysteries to be solved by scholars, but a book of prayer to be spoken in a living way by fathers. And in that moment, I became again a child of my loving Father who wants to say so many more things to me if I could just give up my ideas of knowing better:

I have another far more solid and central ground for submitting to [Christianity] as a faith, instead of merely picking up hints from it as a scheme. And that is this: that the Christian Church in its practical relation to my soul is a living teacher, not a dead one. It not only certainly taught me yesterday, but will almost certainly teach me to-morrow…. One can find no meanings in a jungle of skepticism; but the man will find more and more meanings who walks through a forest of doctrine and design. Here everything has a story tied to its tail, like the tools or pictures [or prayer books] in my father’s house; for it is my father’s house. I end where I began—at the right end. I have entered at last the gate of all good philosophy. I have come into my second childhood.

1 thought on “What a Prayer Book is For”