Joy, which was the small publicity of the pagan, is the gigantic secret of the Christian… I say it with reverence; there was in that shattering personality [of the Lord] a thread that must be called shyness. There was something that He hid from all men when He went up a mountain to pray. There was something that He covered constantly by abrupt silence or impetuous isolation. There was some one thing that was too great for God to show us when He walked upon our earth; and I have sometimes fancied that it was His mirth.

Thus ends the reverently joyful tome of Orthodoxy that led me to the true Church. And thus begins my discovery of the best kept secret of the Church of Jesus Christ. It is not found in austerity or great sacrifice, deeds of great reknown:

For You do not desire sacrifice, or else I would give it;
You do not delight in burnt offering.
The sacrifices of God are a broken spirit,
A broken and a contrite heart—
These, O God, You will not despise.

And what could be more humbling than a grown man making a fool of himself, or rather a grown man revealing the wisdom of God through the foolishness of this world?

Today we attend the birthday party of my daughter’s friend, and a Russian clown named Benjamin Elfant entertains the guests with the usual antics of his clan, but he offers more than just mere fun and games. I have personally experienced this feeling many times at a Russian trapeza (meal at table) or as a guest in numerous Russian homes. Those who can experience the deepest sense of joy or mirth are paradoxically the ones who take themselves with what C.S. Lewis called, “the right kind of seriousness.” And it is clear to me from most of my interactions with Russians that they generally have that kind of seriousness:

Of this only the Slav nature, a broad, powerful nature, which is to others what the sea is to small rivulets, is capable. In stormy times it roars and thunders, raging, and raising such waves as weak rivers cannot throw up; but when it is windless and quiet, it spreads its boundless glassy surface, clearer than any river, a constant delight to the eye.

We have many examples from literature and in our own culture of the wrong kind of seriousness. From Professor Gradgrind in Dicken’s Hard Times to the oppressively rigid religion of Mr. Brocklehurst in Bronte’s Jane Eyre, we are all too familiar with the zeal sans knowledge that is the death of joy. In popular culture, fundamentalist Christianity has become a synonym for misery and repression, in part because of its attachment to this legalistic self-righteousness.

But the right kind of seriousness engenders mirth, peace “not like that of this world” but of the type that takes none of God’s gifts for granted. The clown at today’s party was more than an entertainer that stirs the crowd into an emotional high. His jokes, his magical acts, and most of all his countenance invoked the ever-presence of another world, the world to come in which there will be no sorrow, or sighing, but life everlasting. 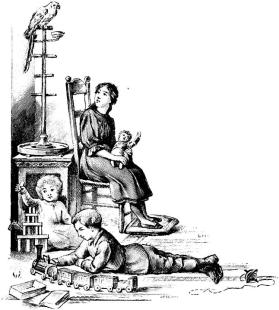 So much of what corporations make and market “especially for kids” lies moldering in the dust heap very soon after its manufacture because these toys lack this divine mirth, this otherworldly joy. Their performance incites excitement, titillates sentiment, brings the devotee to an emotional high, but just like the pagan idols of old they fail to deliver on their ultimate promise of fulfillment. The Christian who chooses Christ as His life makes and uses the things of this world in an unattached way. For this clown’s joy reminded me once again that our true home and nationality lies elsewhere beyond this world.