April 12, 2015
Bright and Saving PASCHA
of our Lord Jesus Christ

Come, let us drink,
Not miraculous water
Drawn from a barren stone,
But a new vintage
From the fount of incorruption
Springing from the tomb of Christ:
In him we are established!
(Ode 3, Paschal Canon)

The strongest and most delicious liquor I have ever tasted was made by the hands of monks in a remote monastery in Greece. It brought refreshment at the end of a long and arduous journey and was accompanied by an equally strong piece of candy. Both were inebriating, but not excessive; intoxicating, while at the same time mysteriously bringing the calm of sobriety.

The Apostle says, “Be not drunk with wine, wherein is excess, but rather be filled with the Holy Spirit.” For it is the Holy Spirit’s presence that transforms any gathering of two or more disciples into a divine party, whether they gather at a cafe in Paris or a remote monastery in the mountains. And now that Orthodox Christians gather worldwide in church to celebrate the saving Pascha of the Lord, it is important to account for the nature of this intoxicating joy and enormous levity we feel at the empty tomb.

It is different from worldly fun which merely titillates for a time but leaves the reveler with a hallow emptiness. Those who seek distraction from the monotony of their work in the world will not find ultimate fulfillment in leisure. Rather, work and leisure without God, says the Wise Man, will consume a person in the end. 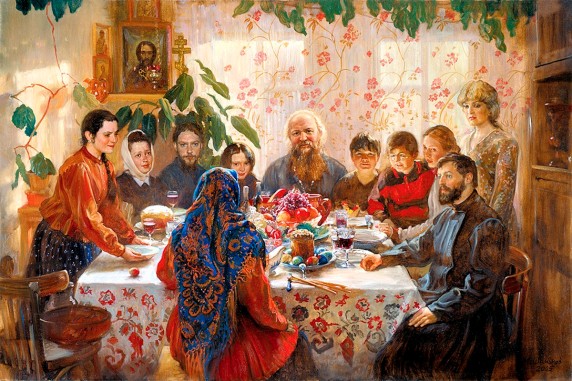 As my Bible Quiz coach used to say, “When we work, we work hard; when we play, we play hard.” We Christians want not a happy medium or a compromise between two extremes, but both things at the top of their energy, work and play fully burning. (rephrasing Chesterton’s classic definition of Orthodoxy) How is this possible to both work hard and play hard? The risen Lord by His Holy Spirit reveals this to us in the radiant labor of a Lent just concluded and now in the laborious levity by which the Lord of Glory breaks the bonds of sin and death. The downright giddiness we feel at the tomb is symptomatic of our own incapacity to handle the sheer size of God’s mirth. For in the supreme triumph of the resurrection, we are not called to be triumphalistic, but sober.

And as we revel in the joy of the resurrection, let us not forget to thank the Great Host of this Feast of Feasts. For in humble gratitude, we realize that NONE of this came to us by our own power but as a free gift from a most rich and generous Heavenly King:

O God of too much giving,
Whence is this Inebriation that possesses me,
That the staid road now wanders all amiss,
And that the wind walks much too giddily, Clutching a bush for balance, or a tree?

How then can dignity and pride endure
With such inordinate mirth upon the land,
When steps and speech are somewhat insecure
And the light heart is wholly out of hand?

If there be indecorum in my songs,
Fasten the blame where rightly it belongs:
On Him who offered me too many cups
Of His most potent goodness ~ not on me,
A peasant who, because a King was host,
Drank out of courtesy.

1 thought on “O God of Too Much Giving”