April 8, 2018
The Bright & Saving Pascha of Christ
the Lord Who Rose from the Dead
Trampling down Death by Death

“So, what what kind of fun stuff have you been up to lately?” I had been engaging my favorite Syracusan barber in friendly conversation about his favorite pastime, hockey, when he politely turned the question towards me and my world. How does one encapsulate the joyful sorrow of Holy Week, the gut-wrenching agony of Golgotha, and the unexpected hope of Easter morning into a 5-second elevator speech? I told him that we had not celebrated our Easter yet and that this was our week to get ready for it. “Wow, that’s cool. So what is it like?” Words fail to describe the rich details of Holy Week and Pascha, yet I wanted to leave a strong impression. Knowing that he had not attended any church for quite some time, I used a comparison that I hoped was familiar. “It’s the one time out of the year that my kids actually drag their parents to church and not the other way around. Who doesn’t like the thought of staying up into the wee hours of the morning for a party that initially lasts until the sun comes up? I mean, what rock concert has ever lasted that long?” 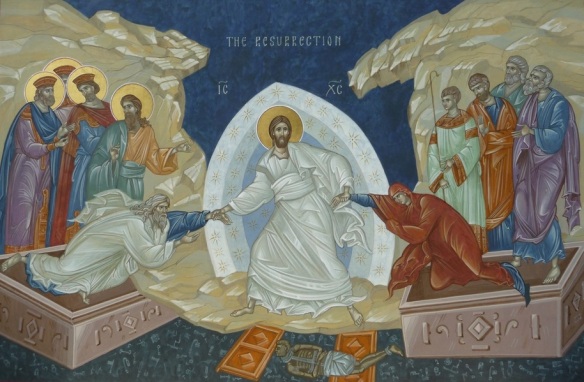 I don’t know if my barber will ever try to come to a celebration of Pascha, but as for me and my family, it is a 40 day-long party we would not miss for ANYTHING. And describing its most potent goodness to the average person is like trying to summarize the ocean. The sight of rich purple vestments and altar cloths changed almost instantaneously into dazzling white greets the eyes on Great and Holy Saturday. The sound of lamentations for the Lord’s burial on Great and Holy Friday changes suddenly to major modes as the choir sings the Evlogitaria, the joyful hymn of the Resurrection.  The taste of the Lord’s goodness greets the mouth as foods previously restricted in Lent are consumed with great gladness. The smell of incense greets the nose and symbolizes prayers of thankfulness wafting heavenward to God. And finally, the touch of believers embracing one another out of the sheer joyfulness of the resurrection makes even the most despondent person hopeful for a life beyond this world. The multi-sensory worship of Christ’s Church testifies to the Kingdom of Heaven.

Another friend of ours told of a TV program she watched recently in which an Orthodox priest described many similar things about Holy Week and Pascha. It sounded to her, “… not as foreign as she expected.” No, dear people, the Church is not some esoteric cult or ethnic ghetto. Rather, She has been proclaiming the truth of the Risen Christ since A.D. 33, nay, since the very foundations of the world. For the Church is the body of Christ, the lamb slain from the foundation of the world, proclaiming eternal life in living color until the end of time.

Tell your barber. Spread it to your friends. Proclaim it to people who have yet to be born in languages yet to be spoken. Truly, truly, truly HE IS RISEN!