For our annual back-to-school post, I would like to highlight a new homeschool program we have joined that has brought back great memories for me of learning things by heart when I was a young man. Congratulations to all students on the commencement of a new academic year, and kali dynami or good strength to all in your studies!

If you could complete this little ditty or many others like it without even thinking about it, you have become an unconscious evangelist for a marketing campaign. And if we are so good at unconscious proselytizing for products, could we not consciously put to memory songs and words which ennoble our souls and not just fatten our bodies? 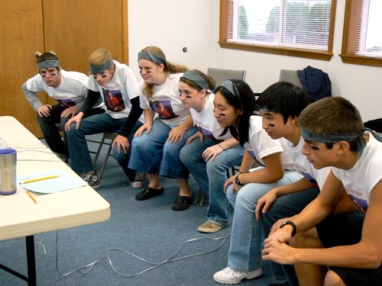 I grew up with a scripture memorization program called Bible Quizzing in which young people in grades 5-12 would memorize whole books of the Bible in an eight year rotation which covers about half of the New Testament, and sometimes books from the Old Testament as well. Unlike other Bible memory programs like Awana or the Navigators which tend to emphasize isolated verses, Quizzing is a more intense immersion into the whole of the Word of God.

I was reminded of this memory program recently as our homeschool joined a co-operative community of other homeschoolers called Classical Conversations (CC) based on an approach to learning reinvigorated by Dorothy Sayers in the early 20th century. At first, we were mostly interested in the community aspect of it, allowing our children once a week to interact with other students and work on the art of public speaking. But what impressed me the most at the outset was a heavy reliance on sheer memory work with the help of clever little ditties that take important historical, scientific, and English grammatical facts and put them to memorable tunes. It is what CC calls “new grammar,” taught in their program called Foundations, and it is something to behold. Here is just a sample of what a catchy tune can do in the service of something other than hustling hamburgers:

I already hear the critics of this approach saying the same things that were said about Bible Quizzing: “But doesn’t this make a game out of the whole affair? Trivialize serious events of history, science, etc. with pop music lyrics? Isn’t this especially disrespectful of the Scriptures, turning the Word of God into a game? What about understanding the significance of these things?”

My answer always begins with the practical results of Quizzing. It is hard for me to think of any serious quizzer who did not somehow dedicate the rest of their life to some kind of part time or full time ministry in the church. As for understanding, the meaning of the sacred text almost always comes later when we are all developmentally ready to handle it. But the point is that when we arrive at that stage of maturity, the foundation of a rigorous memory program gives us the raw material from which to construct a much deeper analysis of life and everything else. It is the second stage of development, called Dialectic among the classical educators, in which a person begins to understand and integrate knowledge. And if all that they have to go on is advertising jingles, it is no wonder the mass majority of our citizens turn into corporate zombies, just mimicking the latest trends in fashion and pop culture, rather than creating culture from the vast resources of the past.

So as we begin a new academic year and hear all kinds of debates about what belongs in a common core of educational standards, let us not forget the ancient ways, and just shut up and memorize it.