Feast of the Ascension
Repose of John Eliot,
Apostle to the Native People of Massachusetts

Surgut wakes up to remind us that we are only about 5 degrees south of the Arctic Circle. The warm weather anomaly ceased yesterday as temperatures dropped by over 20 degrees Fahrenheit and we dug out the few sweaters and jackets we brought to make the trek to church for the feast.

We take so many things in America for granted. When we want to go to church, we stuff the kids into a minivan that often has not only its own space but its own garage. We drive 30-45 minutes to a church which also has plenty of spaces for the car. We complain if dad cannot drop mom and the kids off at the door but makes them walk several hundred feet from a distant spot; doing this in the rain is unthinkable. Once inside, the family is greeted by smiling ushers who point them to a pew that they may even have all to themselves. Ample periphery spaces exist for the several moments mom may have to exit with the really young to nurse, run around, etc. Altogether, the experience may have its bumps if children misbehave, but several systems are in place to accommodate the need. 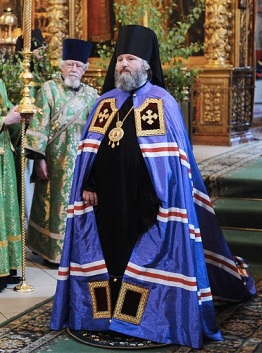 Russia is a nation in a state of reconstruction. For close to a century, all the essential systems available to support a pious and holy life in the Church were systematically dismantled and destroyed. The newly created Russian Federation has only been around for several decades, and though her bishops, government officials, and prominent businessmen have been working diligently to restore what was lost, their efforts have lagged behind the need. In the capital of Moscow, much has been restored and many options are available for any given feast day. But in the provinces like Surgut, the spiritual revolution is just starting to arrive.

Just six small churches and one cathedral serve this booming city of 300,000. Amply sized and conveniently located Hyper-markets (think of a shopping mall on steroids) surround and supply the city with all her shopping needs, while no equally large cathedral serves the people’s spiritual needs. A large plot of ground blessed by Patriarch Kyril for just such a purpose sits open and empty waiting for the resources and the will to accomplish it. With so little supply, it is no wonder only 10% of the Russian nation is church going. There is nowhere yet for many of them to go. 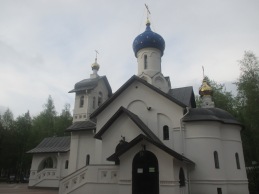 Our closest parish in Surgut

On this Feast of the Lord’s Ascension into Heaven, we rise at 7:30am to walk 1-2 miles to the closest church. The tiny, closet-sized nave only accommodates about 40-50 people who are standing. A large  courtyard surrounds the church, but in the usual frigid conditions, this can hardly be considered periphery space to nurse babies and let antsy ones loose to play. We arrive at the Liturgy just after the Gospel so that our four children do not have long before they receive. As the service concludes, and we turn for the walk home, a light rain adds to the discomfort of 45 degrees Fahrenheit and hastens our steps to return to our cozy apartment to celebrate the feast.

Russia is a nation of survivors and spiritual strugglers. Added to the hardship of the reconstruction after Soviet times is the usual hardship of living so far north. Still, the kingdom of heaven suffereth violence, and the violent take it by force. Struggle is good when it is pointed in the right direction. And that is just what these countless mothers are doing all across the land when they commit the revolutionary act of taking their children to church or going on their family’s behalf to pray when no one else will go. An old monument exists in Surgut dedicated to those fighters who brought the Communist revolution to the city. I predict someday that a new monument will be built of a mother pushing her children in a stroller to church. Communism in Russia is dead. Long live the Church of Christ! Christ is ascended!

Below are the pictures of the cathedral under construction dedicated to the Most Holy Trinity. They had their very first Divine Liturgy there on the patronal feast of Pentecost. The pictures are courtesy of my wife’s cousin who lives there with her family. Glory to God for all things! The Holy Spirit has descended! 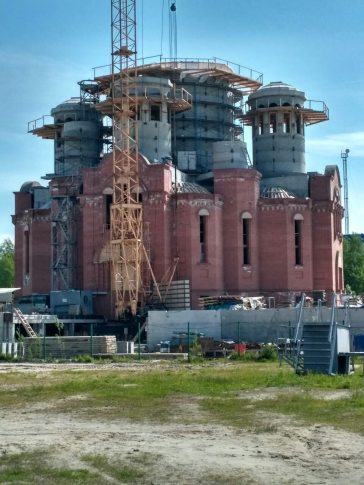 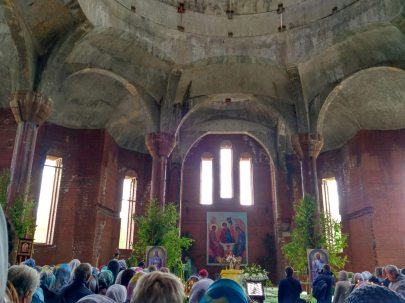 5 thoughts on “Taking the Kids to Church”