One of the most awkward moments in my life happened the first time I visited an Orthodox Church. I came armed with my trusty notebook containing all the biblical questions I was prepared to hurl at anyone who might ask. From my infancy, I had known the Holy Scriptures which were intended to make me wise unto salvation; at that point in my life, however, they served more to puff up my ego. I thought I was prepared for any question about my faith, to give a defense in the form of words. What I was NOT prepared for was an argument in the form of images, a faith in the form of a divine feast, and a challenger in the form and substance of a little child. While I stood through the beautifully festive service with my notebook of interrogations, a wordless boy of not more than three next to me gazed upward in silent wonder at an icon of a saint. I put away my notebook and realized quickly that this babe was getting something that I was missing: wonder in the face of something or rather Someone much larger than my feeble intellect.

I experienced the same sense of wonder the first time I saw a Danish film about a feast, and I rediscovered that wonder recently in reading an article about the short story upon which the film is based. Babette’s Feast is a story by Isak Dineson about a small community struggling to worship God in the true faith while maintaining love and good will towards one another. In their early years, they are bound by the strong charisma of their Pastor, the Dean, but when he dies, communal ties begin to fracture as old, festering grievances take their isolating hold on members. This fracturing affects two members especially, the older, unmarried daughters of the Dean; and when the 100th anniversary of their father’s birthday approaches, they wish somehow to remember him and celebrate his life’s work. But the current schismatic state of their church along with their own extreme austerity keep them from knowing how to feast, how to celebrate, how to remember.

By providential fate, the two sisters are not left alone in their quandary. A French woman, who was sent to them by a mutual friend when she was fleeing the violence of her homeland, came to serve them as a simple maid. It was all that the sisters had ever discovered about their mysterious servant Babette until the day twelve years later that she heard of the ladies’ desire for a feast to celebrate their father’s birthday. For by another providential fate, Babette the maid had just won 10,000 Francs in the French lottery, and she made an almost irresistible request: that she spend some of her newly acquired fortune to throw a party for their departed pastor. The pious ladies agreed but worried more and more as the day approached and strange, exotic ingredients started to arrive from foreign lands.

The simple Lutheran village of Berlevaag had never witnessed such worldly excess, and the sainthood of all those believers feared the loss of their immortal souls if they gave themselves over to it. So, on the night of the feast, they vowed with one another that they would:

…cleanse our tongues of all taste and purify them of all delight or disgust of the senses, keeping and preserving them for the higher things of praise and thanksgiving.

What transpired on the night of the feast was nothing short of miraculous, as the extraordinary food and the powerful drink gave free reign to their tired and shut-up hearts. They remembered, they celebrated their founder, but most of all they forgave one another. At the hands of this French maid, they were transformed from hateful, bickering sinners into the body of Christ. For it turns out, [spoiler alert] Babette was no mere maiden, and the feast she served was no mere dinner; for she was a  chef of a world-famous restaurant in Paris and eating one of her dishes there was compared by many in the Parisian intelligentsia to be:

a kind of love affair… of the noble and romantic category in which one no longer distinguishes between bodily and spiritual appetite or satiety. 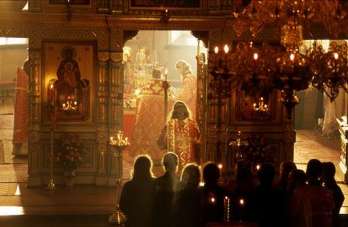 Such too was the fate of my best intentions to stay doctrinally pure that first time I visited an Orthodox Church. Against my better judgment, I was wooed by her beauty, and  my shut-up old heart began to learn too of her truth. For after my own experience of multiple sects like that started in Berlevaag, I longed for a faith that transcended the light and momentary struggles of a small, local community, a faith that could feast upon something other than rational precepts. In the Church, the Lord Jesus Christ himself offers his body and blood for the healing of both soul and body. It is a faithful feast like no other on earth, for a people starved for peace and reconciliation within community.

1 thought on “The Feast of Faith”