In the name of the Father, and of the Son, and of the Holy Spirit. Amen. Glory to Jesus Christ! Glory forever. What can a young child really do? What is a young boy or girl good for besides growing up into adulthood? Aren’t we adults the ones who run the church and isn’t their place merely to respect and obey instruction until the time comes when they are old enough to run things themselves? While I would agree with at least this assessment of the role of children in the church, I challenge us to see a deeper dimension of these to whom our Lord promised that the Kingdom of Heaven belongs. These same youths that the Apostle Paul enjoined in his letter to Timothy not to despise because of their youthfulness.

Today, on our pathway to Christ’s Nativity, as we await a powerful birth from an unwed, teenage Virgin Mother, the Church gives us another example of power in youthful chastity and virginity. The maiden Barbara, daughter of a Roman governor from one of the richest provinces in 3rd Century Rome possessed everything a girl her age could desire: a rich father, a beautiful and comely appearance, and an inheritance that could grant her the handsomest of earthly husbands. You could say she lived the charmed life of a Disney princess, awaiting the day she would be swept off her feet and live happily ever after. But earthly happiness was not enough for this little girl; she desired something more. And when her friends came secretly proclaiming to her the preeminence of Jesus Christ, the One who is, “… before all things, and in all things, and in whom all things consist,” she desired instead union with this eternal Bridegroom. 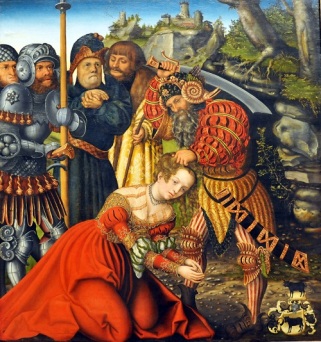 Her enraged father Dioscorus did everything in his power to bring her back to her pagan senses. He tried enticing her with more riches, luring her with ever more handsome princes, and when none of this worked, even resorted to violence against his own kin. Using his authority and position, he ordered soldiers to beat his own daughter mercilessly. He had her stripped bare and paraded on an open street to be mocked, and when all else failed, he finally beheaded her.

But Christ never left her to be a powerless victim. For Barbara, the teenage maiden became what the Church calls a Great Martyr, a witness for the faith powerful enough to stand against the Devil himself. For while they stripped her of her dignity and laid bare her flesh to be mocked, the angels clothed her with a light that no man could behold. And when her earthly tormentors finally succeeded in ending her life, the earth itself swallowed her up, not bearing to see anymore injustice done to Christ’s elect. Truly, Christ’s power is made perfect in weakness, for this little girl brought an entire empire to its knees. In last night’s Vigil service, we read this from the saint’s canon:

The tyrant who rageth in vain to destroy the earth and annihilate the sea lieth like a plaything beneath the feet of the maiden Barbara; for Christ, having trampled him down, hath bound him like a vile bird. (Irmos 4)

And so, in this season of Immanuel’s quiet coming from the womb of an unwed, Virgin Mother, how have we underestimated God’s power to work in the weakest of our members? Who here feels the pain of being cut off, disenfranchised or victimized by circumstances beyond your control? Then know, that by the prayers and protection of this Great Martyr Barbara, whole cities have been spared, great armies have been foiled, and manly artillery units have been emboldened to stand firm. May Christ out True God through the intercessions of Great Martyr Barbara, deliver us from the enemy of our souls and lead us to the paradise to come. In the name of the Father, and of the Son, and of the Holy Spirit. Amen.