In the name of the Father, and of the Son, and of the Holy Spirit. Amen. Christ is risen! St. John the Beloved begins his first epistle, “That which was from the beginning, which we have heard, which we have seen with our eyes, which we have looked at and our hands have touched—this we proclaim concerning the Word of life.” (I John 1:1) And this morning’s Gospel also from St. John confirms this verifying faith through the testimony of another apostle, Thomas. Many identify him as doubting Thomas, a rather unfortunate label which casts a negative light upon his hesitancy to at first fully believe. But the Church in the Divine Services for today’s feast clearly proclaims Thomas’s unbelief or hesitancy to believe as good. So what is it about Thomas’s unbelieving belief that we can and should emulate?

In St. Peter’s second general epistle, he testifies, “For we did not follow cleverly devised stories when we told you about the coming of our Lord Jesus Christ in power, but we were eyewitnesses of his majesty.” (II Peter 1:16) It is for this reason that the resurrected Christ appears to his disciples in this morning’s Gospel and elsewhere in the Scriptures. He does not want his disciples to base their faith on old wives’ tales or clever special effects but on evidence: evidence that can be tested, evidence that can be apprehended with the physical senses, and evidence that is scientific on one level, even when it ultimately transcends the known laws of science. In these 40 days after his resurrection, St. Paul testifies that the Lord Jesus Christ makes more than 500 appearances (I Corinthians 15:6) to his friends and followers so that, 1) They may begin to understand the mystery, and 2) They may begin to proclaim it, “in Jerusalem, and in all Judea and in Samaria, and unto the uttermost part of the earth,” (Acts 1:8) to a nation as far flung as India and to a people as hardened as pagan Rome.

The 2016 film Risen features a seasoned, war-weary Roman Tribune who witnesses Christ’s last moments on the cross and then three days later is summoned by Pontius Pilate with a task. The Tribune Clavius is asked to quell a disturbance of quite a different kind. Instead of seeking and destroying enemies of the state, he is commanded to find and confirm a death. It is the death of the very same Nazarene king he saw die with his own eyes and whose side flowed with blood and water when it was pierced.

The Tribune begins with questioning Jesus’ disciples. His usual interrogation methods and threats of imprisonment or even death have virtually no effect as one follower after another testify to a most terrifying fact: There is no body to be found. Clavius continues his hunt, but the resolve of these disciples unnerves his skepticism. After interviewing the soldiers who were posted to keep watch, he decides he needs to investigate the scene of the alleged theft himself. When he sees with his own disbelieving eyes the seals not carefully cut but burst asunder and the grave clothes lying carefully folded in place, he seriously questions the story of the Jewish leaders. As we sang during Bright Week:

“Who hath ever heard of a corpse being stolen? Especially one anointed with myrrh and naked, with the funeral shrouds abandoned in the grave?” (Vespers stichera verses for the Resurrection, tone 5) 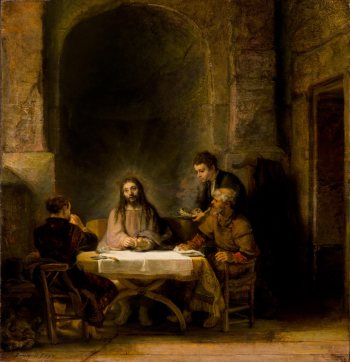 The determined detective continues his search, but it is no longer at the behest of Rome. As the infectious joy of the Lord’s disciples works on Clavius, he follows them around until he finds the body he was looking for— but it isn’t lying in a tomb—it is alive, or rather, HE is alive, laughing with his disciples, sharing a meal with his friends, and showing them the tell-tale signs of his resurrection. The stunned Roman Tribune had no category for what he was witnessing. He was beginning to learn the truth pronounced by British journalist and Christian apologist G.K. Chesterton who said:

“All science, even the divine science, is a sublime detective story. Only it is not set to detect why a man is dead; but the darker secret of why he is alive.” (G.K. Chesterton, The Thing)

In the movie, tribune and disciple both witness the risen Lord. While the disciple Thomas makes a confession of faith, Clavius holds back, still uncertain. Both are doubting, but the disciple’s doubt is one that leads him to deeper faith, whereas the Roman’s doubt leaves him wavering.

Where are you this morning in the face of this great mystery of the resurrection? Are you like the fictional, but true-to-life character of Clavius, seeking the truth but still missing parts from the divine puzzle of your life? Or do you feel closer to Thomas, whose verifying faith sent him the furthest of all the 12 apostles in spreading the Good News of “His Lord and His God.” Wherever you are on your journey, know that our faith is one which should trust, but always seek to verify with the witness of all five of our God-given senses. We are invited these 40 days of Pascha to see the empty tomb, to hear the words of the angel, to taste his life-giving body, to smell the fragrant myrrh and incense, and to touch his hands and side. “Be not faithless, but believing.” Amen. Christ is risen!