April 28, 2019
Bright and Saving PASCHA
of our Lord Jesus Christ

I love how the character of Christ is portrayed in the 2016 film Risen. In the movie, a Roman tribune is assigned by Pilate to investigate the alleged theft of the body of one late Hebrew rabbi who claimed to be the Messiah. This same tribune had witnessed Christ’s crucifixion himself, so he knew his man. But upon his first encounter of the risen Lord, he was taken aback. This mighty Roman tribune who had commanded legions of soldiers and put down entire insurrections against Caesar was terrified not so much by Jesus’ resurrectional power, but by the way in which it was manifest: an uncanny sober levity and a peculiar nonchalance. He was smirking like one who had pulled off the most enormous con game ever played.

The last Gospel read among the 12 passion gospels for Holy Friday and again the last one read for Holy Saturday are the same and reveal the nervousness of the godless authorities who were beginning to piece together the great cosmic sting operation: 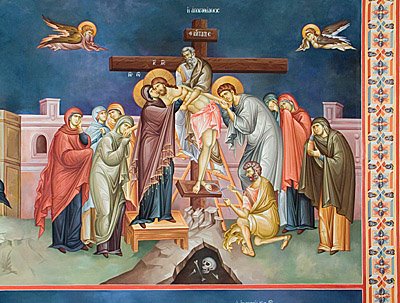 On the next day, which followed the Day of Preparation, the chief priests and Pharisees gathered together to Pilate, saying, “Sir, we remember, while He was still alive, how that deceiver said, ‘After three days I will rise.’ Therefore command that the tomb be made secure until the third day, lest His disciples come by night and steal Him away, and say to the people, ‘He has risen from the dead.’ So the last deception will be worse than the first. Pilate said to them, “You have a guard; go your way, make it as secure as you know how.” So they went and made the tomb secure, sealing the stone and setting the guard. (Matthew 27:62-66)

They had killed Christ. The Roman soldier had ensured his actual death with the spear to his side. The Pharisees’ own Nicodemos, a trustworthy man, had taken him down from the cross and laid him in a new tomb. It wasn’t one of those old tombs with a lot of escape passages bore into it by ancient body snatchers. And now they were going to make it more secure with the stone, a seal, and a guard of soldiers handpicked from the temple. They even had a plan to combat any public relations embarrassments: “Say that his disciples stole the body.”

But the Lord of Glory was wise to their machinations. For the devil, the real deceiver, had not accounted on the deceit of the deathless one:

When Thou, the Deathless Life, didst go down to death, then didst Thou slay hell by the lightning flash of Thy Divinity. And when Thou didst raise the dead from the lower world, all the Powers of Heaven cried aloud: Christ our God, Giver of Life, glory to Thee. (Resurrection Troparia, Tone 2)

For Christ, the true Light who enlightens those with faith, caused demonic darkness to cease by beating the devil at his own game. Our Lord, by his rising from the grave, deceived the deceiver and ushered in life eternal for those who with faith and longing magnify him.

May He who rose from the dead, Christ our true God by the intercessions of his most pure Mother, by the power of the precious and life-giving cross, enable us to glorify him in purity of heart.