I am an art collector. A good painting with an equally good story has a way of catching my eye and heart. But because I have neither the time nor the pocketbook, most of my collecting happens online via Google image searches. And once I find an image that means something particular to me, I like to hunt it down to its source, where it lives, usually in a museum or sometimes in a church.

When I was recently in Chicago for a clergy retreat, I felt compelled to visit that fine city’s Art Institute. I remembered it to be the home for at least one or two of my favorite works. But as I neared the marble steps, I was racking my brain to remember the particular painting there that had stolen my heart the most. It wasn’t Edward Hopper’s Nighthawks or Wood’s American Gothic; neither was it the Paris Street; Rainy Day or any of the museum’s excellent collection of Rembrandt. All of these are undoubted masterpieces, but they don’t tell a story that speaks directly to me.

Then I saw him, as I turned a corner toward the medieval collection: A painter whose work bridged the gulf between East and West and introduced the Spanish Renaissance to many ancient Orthodox forms of other worldly expression: Doménikos Theotokópoulos, the exile from the fallen Byzantine Roman Empire who is known best to the world by his Spanish nickname, El Greco, “the Greek”. The two paintings they have side by side of one another at the Institute provide a wonderful introduction to some key themes in Holy Week. Billed together in a kind of mini-exhibit, the title might be “The Lord’s Last Farewell to His Friends.” 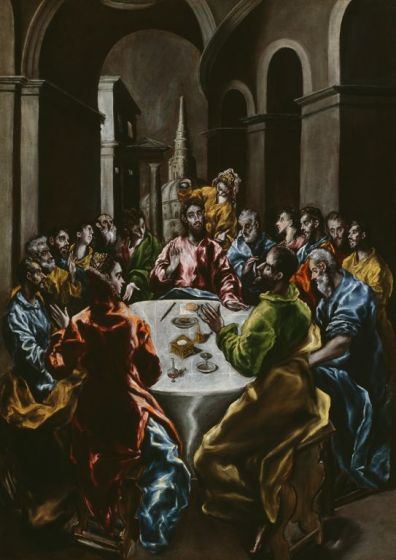 The first of these 2 paintings depicts the event described in the Gospel for the last Sunday in Great Lent and the one read during the Bridegroom Matins service for Great and Holy Wednesday: The Feast in the House of Simon. In this scene of the Lord’s last days, the woman caught in many sins presumed to be Mary Magdalene lavishly spends her life’s earnings on costly myrrh to anoint Jesus’ feet, prophesying his future crucifixion and burial. The look of shock and revulsion on the faces of the Pharisees contrasts with this woman’s simple act of selfless devotion and repentance . The spatial distortions and almost electric colors set the scene aflame with the crux of each sinner’s decision: Namely, will we, his disciples, follow him all the way to the end, whatever it takes?

The second painting in my mini-exhibit on the Lord’s last days would include another El Greco painting there that took me by surprise. It is titled Christ Taking Leave of His Mother, and it depicts Christ saying goodbye to the Blessed Virgin Mary in advance of his betrayal and death on the cross.

It is an imaginary event not described explicitly in the Gospels but nevertheless faithful to their form and substance. Entwined and elongated hands suggest the interwoven life of Mother and Son, while the expression on each face sparkles with shared memory. It made me suddenly weep, the same way I am overcome during the Matins for Great and Holy Friday. There is a particular moment during the readings of the 12 Passion Gospels when one of the hymns found between readings imagines a conversation between the Most Holy Mother of God and her Son. I would like to think that this conversation matches the painter’s imaginative piece perfectly:

Seeing her own lamb led to the slaughter, Mary his Mother followed him with the other women and in her grief, she cried: “Where dost Thou go my Child? Why dost Thou run so swiftly? Is there another wedding in Cana, and art Thou hastening there, to turn the water into wine? Should I go with Thee, my Child, or shall I wait for Thee? Speak some word to me, O Word; do not pass me by in silence. Thou hast preserved me in virginity, and Thou art my son and God.

If this were a film, it would be appropriate to have flashbacks of the happier moments in our Lord’s life: as a baby, a toddler, a youth, a young adult, and then finally a man who deeply loves and respects his mother. Is there any doubt of our Lord’s complete and total humanity? Just ask his mother and the other myrrh-bearing women who followed him every step on the way of his voluntary passion.

May he who deigned to be crucified for us men/women and for our salvation show us also his Holy Resurrection! Kalo Pascha, a good and glorious Resurrection to all!