We are blessed with almost perfect weather this week, almost like Southern California. On day 2 at Camp Radonezh near Optina Monastery, the same pattern follows except that I am given a different obedience and a different set of campers in the morning. We hike to the farther Skete of Saint John the Baptist in order to pick berries, that great Russian tradition and past time. This time, a particular young man is the de facto leader of the group and what a lad he is: the kind of boy who knows the answer before the question is asked, an uber-capable young man already at the age of 10. He, of course, not only speaks decent English but claims to teach it along with Spanish. I have no way to evaluate the latter skill but given his proficiency in everything else, I have no doubt.

By noon, I collapse after lunch as my 40 plus year-old body succumbs to the fatigue of sleeping two nights on a wooden pallet with only a few foam pads to soften things. I put my youngest to sleep in the nearby hotel where my wife is staying with our two youngest, and I sleep for 3 hours. I am not complaining, for how can I when babuskas twice my age have been to camp from the beginning and report that the hard surface, “… is just what I need at my age.”

The spirit of contentment and love of labor pervades all activity in the camp. I am enjoying most these little obediences I am given accompanying the younger men in the UAZ [oo-ahz], a Soviet era tank of a van that does for you just about everything you want it to do.

I have gone on several UAZ adventures so far including trips into the forest to find straight fallen trees to serve as soccer goals and one trip to take out the trash and fill our water buckets (a trip needed 2-3 times a day for camp our size). Looks like I may even get to drive the thing as the current driver is ailing and needs a break. I pleaded my lack of proper documents (left my license at home) but out here in the wilderness, such documentation is not as necessary, as the nearest police station is several kilometers away and with the bumpy roads, it is unlikely I’ll be cutting donuts in any parking lots. We will see if this actually comes to pass.

In the evening several monks visit us from the monastery and a campfire brings out the best in Russian culture— full-voiced, harmonic folk singing. Our mostly silly campfire songs in America don’t hold a candle to these ancient songs of life lived on the land. Of course, there are a few light-hearted hymns, but the overall mood is deep, abiding joy. And best of all, it is led by two monks! One younger looking novice on guitar I am told used to have his own rock band before his tonsure. Another is my personal favorite: a monastic father who assisted in my metal yard ability obedience starts most of the acapella singing. But even in his exuberance, he is careful to avoid the more bawdy verses, saying with a smile, “Monks should not sing these verses.” 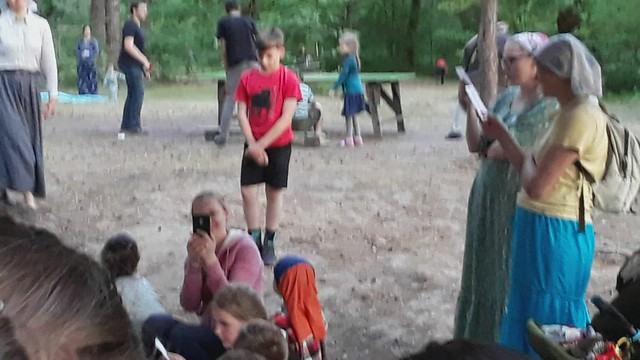 Russians always like to give the English speakers a chance to match them with a song or two. Enough of us present know an autumn song sung at our beloved parish school in Boston,

but the song which made the strongest impression was the Russian-Jewish song about true love, Tumbalalaika. The chorus in Yiddish was easy enough to sing along with and though verses were sung in English, the novice on guitar recognized in the chorus the presence of that very Russian instrument, the balalaika. It was the perfect American contribution: a folk song imported by Russian immigrants, translated into English, and now re-gifted to its country of origin. It proved that there are parts of America not completely consumed with sex, drugs, and rock and roll.

But what are we trying to prove anyway? As Christians, our first and final loyalty lies with the Kingdom of God in whatever nation or culture it dwells. Our allegiance to this Kingdom should always bring out the best in our national heritage.