Time definitely passes differently at a camp near a monastery. I have asked two people already for the time and the day and both have responded alike that they count the day and the hour not according to their watch or phone, but according to their obedience: when it begins (now), when it ends (soon), when we will eat the next meal (soon enough), and when we will go to bed (before and after prayer). Who needs to measure the day with numbers in such an arrangement?

This monastic pattern of life makes this camp feel very different then even Orthodox camps I have visited in America. For it makes even loud events like sports or singing more subdued, more controlled— a kind of sober exuberance. END_OF_DOCUMENT_TOKEN_TO_BE_REPLACED 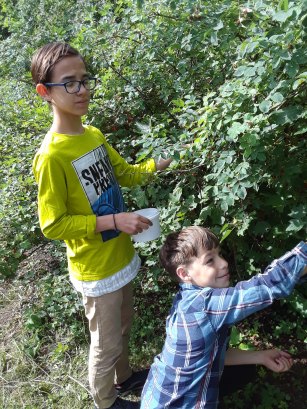 We are blessed with almost perfect weather this week, almost like Southern California. On day 2 at Camp Radonezh near Optina Monastery, the same pattern follows except that I am given a different obedience and a different set of campers in the morning. We hike to the farther Skete of Saint John the Baptist in order to pick berries, that great Russian tradition and past time. This time, a particular young man is the de facto leader of the group and what a lad he is: the kind of boy who knows the answer before the question is asked, an uber-capable young man already at the age of 10. He, of course, not only speaks decent English but claims to teach it along with Spanish. I have no way to evaluate the latter skill but given his proficiency in everything else, I have no doubt. END_OF_DOCUMENT_TOKEN_TO_BE_REPLACED

We arrived last night and awoke to our first day at Camp Radonezh located just a few kilometers down the road from Optina Monastery. It is so far a great combination of two great loves of our family– camping and monasteries in a rare combination of both.

We begin and end the day with traditional services in slavonic. The campers take turns reading the ancient, yet timeless prayers. It is striking that though so many different editions of the prayer books are present, they all say the same prayers in the same order. We have not prayed these prayers in English long enough to achieve this level of unity (just over 150 years). There is something truly powerful about entering a language that has been prayed for over a millennium. END_OF_DOCUMENT_TOKEN_TO_BE_REPLACED

June 30, 2019
In honor of the 5th Anniversary of the Repose of Fr. Herman Podmoshensky

What hath Athens to do with Jerusalem? The famous quip from the first century critic Tertullian was meant to dismiss any possibility of cross-pollination between these two ancient cities and cultures. On the one hand, Jerusalem, city of the Savior and of the chosen people who gave Him birth stands as a symbol of separation from the world and all its lusts. On the other, Athens, city of the gods beyond numbering and of philosophies beyond counting, stands as a paramount symbol of this world and its festival of vanity. Such was the diametric opposition that these two cities represented.

I felt a similar separation between America and Russia the first time it was presented to me by one of my spiritual fathers whose repose we remember this day. In hearing of Holy Russia, Third Rome, and the Holy Elders in a 19th century monastery called Optina, I could only respond, “What hath Madison Avenue to do with this new Jerusalem?” END_OF_DOCUMENT_TOKEN_TO_BE_REPLACED