Our concert this past weekend in Montreal was an occasion too grand for words. It was an incredible honor to sing such a concert with two wonderful choirs, both ours, the Boston Byzantine Choir, and the theirs, the two choirs … Continue reading →

My phone rang this morning at 6:00am. “Such a strange time for anyone to be calling. It could not possibly be a salesman.” Caller ID said, “City of Boston,” and when I answered it, the robo-call voice on the other end spoke of a city-wide advisory to stay indoors while police were in hot pursuit of a suspect who was roaming the streets, extremely armed and dangerous. Now, it is one thing to hear of such tales from browsing too many conspiracy theorists’ websites late into the night. It is another thing entirely to get an official alert from city hall bright and early on a Friday morning. I immediately vowed not to make the same prayer-less mistake that I made earlier in the week when given similarly perilous news. In the wee hours of the morning, before most of my family even thought about arising, I said an Akathist prayer to the Tsar-Martyr Nicholas of Russia and followed it up with the Akathist prayers to the Mother of God that I spoke about in an earlier post. END_OF_DOCUMENT_TOKEN_TO_BE_REPLACED

Several years ago after the Virginia Tech Massacre, I wrote an article for our parish newsletter entitled Peace-keepers of Another Kind: Monks of 4th Century Antioch. Given the recent heroic efforts of the first responders at Monday’s Boston Marathon Bombing, I was reminded of this article, and thought it might be time to resurrect its contents for publication in this blog. I hope you agree that it is as timely today as when I first ran it six years ago. 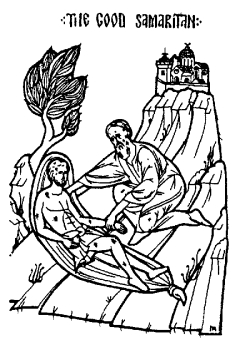 What does it take to restore peace to a city or country once overrun with violence and civil strife? This question is central in considering recent events both at home with shootings at Virginia Tech and abroad with the attempts of our military to quell sectarian violence in Iraq. A show of force by the ruling authority can help, but it is only part of the solution to what is a much greater spiritual problem, and often an excessive show of force may even make matters worse.

In fourth century Antioch, a crisis broke in the city when a group of citizens who disapproved of the Roman Emperor’s new taxes rebelled by desecrating his statue placed in the center of the city as a sign of his authority. They toppled the statue, tied it to the back of a horse, and dragged it through the city streets. In this ancient empire, any action taken against the Emperor’s image was considered a direct assault on the Emperor himself. These rebels started a riot and placed the whole city under the suspicion of the crown. Magistrates and troops were dispensed at once from Constantinople and rumors ran wild about who was to blame to the extent that all kinds of important public officials and common citizens fled for their lives to “undisclosed locations” around Antioch. END_OF_DOCUMENT_TOKEN_TO_BE_REPLACED

I first heard of the tragedy that struck our fair city in the form of an email call for urgent prayer. And being the prayer warrior that I am… [ahem] well, no, you guessed it. Instead of instantly falling on my knees to almighty God and begging the protection and supplication of his saints and angels, I instead worried and hunted on the internet for information when information was least readily available.

I had been just four blocks away from the blast site with my three young children only several hours before the incident. We enjoyed a lovely morning of carousel and swan boat riding and were contemplating a trip into the spectator crowds around the marathon when a wiser notion [nudge from a guardian angel?] steered us underground on the metro and back towards home. END_OF_DOCUMENT_TOKEN_TO_BE_REPLACED