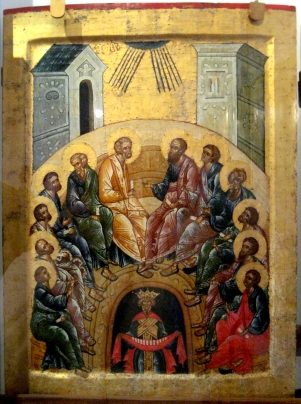 It always happens to me as we near the end of our time in Russia. The battle fatigue sets in from being constantly surrounded by a culture not my own, hearing another tongue I can barely speak myself, and meeting people with whom I miss so many unspoken cultural cues and gestures. In its most extreme form, it is called culture shock, and even the most seasoned travelers are subject to it. The best remedy for it is a kind of cross-cultural humility that’s hard to come by for most Americans, and especially for this one.

Growing up in a small town in the midwest, I found excursions to the big city of Toledo to be enough of a thrill. When we wanted to visit a foreign country, we traveled several hours north and crossed the border into Canada (in those days, they did not even require a passport). With our country surrounded on two borders by oceans, it is easy for us to think of ourselves as the center of the world. The farthest most Americans I knew traveled was down to Florida for Disneyland. But there was one exception to this general rule, and that was those who had accepted the call to be missionaries and spread the Gospel throughout the world. END_OF_DOCUMENT_TOKEN_TO_BE_REPLACED 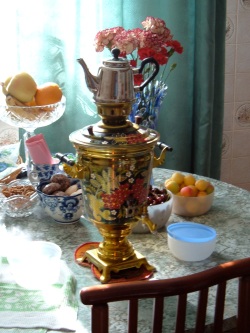 Moscow is principally for us a place to gather as many friends and family as we can muster at any given time, and since the observed holiday for Victory Day is tomorrow (Monday), the Sunday gathering at our apartment is more than usually crowded. My American friend and his family come over with fried chicken wings and garlic bread, while my wife’s local cousins bring their children for a sleepover. It is a grand occasion of East meets West with overlapping conversations in Russian and English. But the capital part of the evening after all the eating and customary toasting is the after dinner tea. It is the most vital symbol of the seemingly endless conversation that ensues. END_OF_DOCUMENT_TOKEN_TO_BE_REPLACED 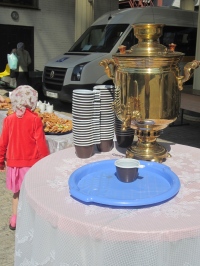 One of the big temptations in traveling to another land is to expect many of the familiar things there from your home country. Or if those things do not live natively in the host culture, the temptation is to somehow import them. Such a tradition for us is the great American church custom of coffee hour. Yes, that’s right, coffee hour is not a given at churches around the world but is a distinctively American custom for Christians to gather after a Sunday service for at least coffee and donuts and sometimes a whole lot more.

One of the churches we consider our home away from home in Moscow has long held the tradition of refreshments and social mingling after the Sunday Liturgy, but they don’t call it coffee hour and they don’t claim that the custom is borrowed from America. END_OF_DOCUMENT_TOKEN_TO_BE_REPLACED 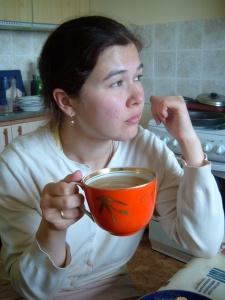 I have given up finding the perfect cup of coffee in Russia. Such a thing just does not exist in a culture so based on drinking tea. A wikipedia article I researched reports that 82% of Russians drink tea on a daily basis.

Sure they have coffee available for the token foreigner who shows up and prefers it, but it is always an after-thought, a concession, appealing only in its exotic qualities. Tea is the native drink for Russians. Has been for over 300 years, and it is always available in large doses, the larger the better. END_OF_DOCUMENT_TOKEN_TO_BE_REPLACED 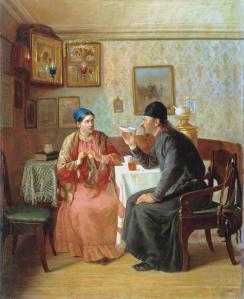 In Greece, they have a saying, “Everything is possible, and everything is impossible.” In Russia, at times it seems that only the latter is true. Yesterday, we spent nearly the entire day attempting to set up a wireless connection for our laptop to no avail. But as I said in a previous post, these difficulties are gifts from God so that we may rely more on His power and less on our strength or the strength of human systems.

Today is Sunday, Voskresenie, which literally means “the Day of Resurrection.” The atmosphere all over Moscow is qualitatively different on the Lord’s day, even for non-believers or those who don’t attend church for the morning Liturgy. Streets are relatively free from traffic and a large portion of people on the street are all headed to church. It’s refreshing to be in an Orthodox country in which almost every church you pass by is of the same faith. This unity trickles down to the smallest of details, so that even the food in the grocery store is marked as “fasting appropriate.”

In the afternoon, I have my first experience in Russia with a trapeza (a sit-down meal in which the head directs the conversation or reading in a spiritual way) at our apartment attended by a priest traveling through Moscow from Ulan Ude. I have been to larger monastery trapezas, but this time it was only Fr. Alexei, an igumen (head) of a monastery in eastern Siberia, and our family in attendance. What a treat to speak to a batiushka (Russian diminutive for priest) from a remote southeast corner of the motherland! Tales abounded of overcoming bureaucracies to bring much needed improvements to local villages and of bringing the faith to areas with many nominal Orthodox and few churches to serve them. Truly, the situation here in the capital, with a church on almost every corner, is not yet so in the outlying provinces where they are just beginning to rebuild after the fall of communism in 1991.

Still, the overall tone in the Orthodox Church in Russia is revival and renewal, with new churches being built constantly, and it is a glorious thing to behold.