Sunday of the Triumph of Orthodoxy
February 25, 2018

“A time is coming when people will go mad.” St. Anthony said, “And when they see someone who is not mad, they will attack him saying, ‘You are mad because you are not like us.”

This sounds quite prophetic for our day, especially when so many people try to make everything relative, denying the existence of absolute truth. We Orthodox Christians, however, believe in absolute truth because Truth incarnate is Jesus Christ Himself. He is the Way, the Truth and the Life, and His truth is unchangeable.

Truth is truth, and falsehood is false, no matter what the majority say, and no matter how one tries to dress up falsehood. The Bible describes God as “the Alpha and the Omega, the One who is, who was, and who is to come, the Almighty” (Rev 1:8). Our Lord God is eternal and unchanging, and therefore His Word and His teachings are unchanging. In every age and in every culture, the Gospel has to be presented in a refreshing and understandable way, but the truth itself is unchanging.

The triumph of divine truth. I could choose to focus on many different aspects of truth, but one I will focus on today is the universal nature of our faith. St. John Chrysostom once said, “There are two kinds of bishops (or we could say Christians). One who says, ‘My parish is my universe.’ While the other says, ‘The universe is my parish.’”

One of the most common, yet subtle, dangers – I may even say heresies –  that has plagued the people of God from the time of ancient Israel until today is the illness of parochialism in its individual and communal forms. Too often people want to ignore God’s universal vision and plan. This begins when individuals allow their tiny ego to replace Almighty God in the center of their heart. Our ego then distorts and corrupts our understanding of ourselves, our view of our neighbor, our concept of God and our vision of the world.

“My parish is my universe” so many faithful believe today. 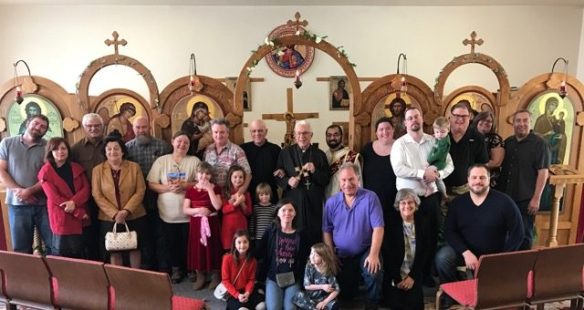 Instead of a worldview where God the Creator is at the center, a view where all creation points to God and gives Him glory, slowly the ego – whether the individual ego (I, me, or my) or the communal ego (my family, my people, my parish, my language, my kind, my culture) –  gradually takes over and this self-centered mentality distorts an authentic Orthodox worldview.

Our Triune God has a love and vision for all. Remember in the Old Testament how God created ALL humanity, and how He is the Father of all people and races in the world. He is not “my” God, or only the God of “my people.” Second, we may remember how God chose a certain people, the Israelites, as His prized possession, but we often forget WHY he chose them. When God called Abram, the father of the Israelites, he said, “Go forth from the land of your kinsfolk and from your father’s house to a land that I will show you. I will make of you a great nation, and I will bless you. I will make your name great, so that you will be a blessing… And all the families of the earth shall find blessing in you.”

This central verse of the Old Covenant reveals God’s overarching plan of salvation for all people. Abraham was called to leave what was familiar, to leave his own, to depart from his tiny ego, and to follow God in faith, so that he would be blessed by God, and, SO THAT he and his nation would become a blessing for ALL the families of the earth!

“The universe is my parish!” That is the mentality that God wanted us to have from the beginning, and this represents an authentic Orthodox worldview.

Unfortunately, we see time and again how God’s people forget, ignore, and even deny their universal calling, and choose instead to become a closed, parochial, often ethnocentric community.

Jesus Christ, the supreme example in the New Testament, made abundantly clear that no boundaries could limit His unconditional love for all people. Whether it was a heretical Samaritan, a Roman centurian, a foreign Syro-phonecian woman, a corrupt tax-collector, or an immoral adulterer, Christ saw each and every person as a beloved child of His. He fulfilled the prophecy of Isaiah: “Although a mother may forget her child, I can never forget you. I have carved you on the palm of my hand.”

The “One who is, who was and who is to come, the Lord Almighty” (Rev 1:8) is the Lord of all, and no egocentric, ethnocentric, or parochial mind or Church can properly represent him! 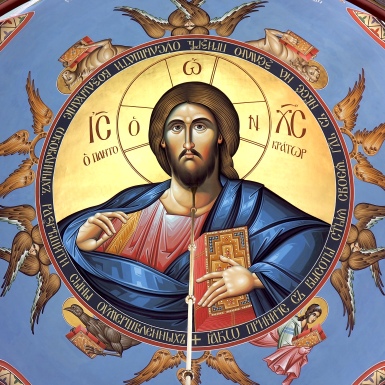 Today, as we celebrate this Sunday of Orthodoxy, we need to rediscover the truth in the universality that Orthodox proclaims! The whole meaning of Orthodox Christianity has to do with looking outward, remembering the other! The Philokalia, which is a collection of wise sayings of Church Fathers, says, “Blessed is the one who rejoices in his salvation, but even more blessed is the one who rejoices in the salvation of the other.”

St. Basil the Great warned against the danger of any egocentric attitude: “Those who withhold any of God’s gifts for their own enjoyment, failing to offer help to others, are condemned like the servant who ‘hid his master’s money.”

These words of St. Basil focus on the problem of material inequality, but could we not also apply his words just as readily to the great treasure of our faith, which too often we keep for ourselves, hidden away from others. Many of us proudly claim this ‘pearl of great price’ as the possession of our ancestors, forgetting or ignoring the burden of responsibility we have in sharing our spiritual wealth with others, including those not within the little circle of our local Church. Will we not be condemned for enjoying it ourselves, while being unwilling to share it with others in our community, as well as ignoring the responsibility we have in offering a witness to the ends of the world.

‘My parish is my universe?’ or ‘The universe is my parish!’”

It is obvious which type of attitude Chrysostom, Basil, and other such Church Fathers possessed. It is this legacy of a truly ecumenical, universal and missionary spirit that we need to remember today as we celebrate the victory of truth on Orthodox Sunday.

Unfortunately, though, too often our churches reject the universal vision and become nothing more than proud, closed, ethnic or social clubs. What a terrible distortion of God’s vision when a community minimizes the Gospel to fit its own people alone. Israel fell into this mistake countless times throughout the Old Testament. The early Church gave in to this temptation in the first century, with its Judaic prejudice. And in every era the heresy returns – whether through Roman arrogance, Greek pride, Slavic bias, or even modern American haughtiness. God is too great to be limited by any one culture, language, or worldview, no matter how great.

Archbishop Anastasios of Albania says, “The opposite of love is often called hatred, but its real name is egoism. This is the denial of the Triune God who is a koinonia (a communion) of love. Christian life means continual assimilation of the mystery of the cross in the fight against individual and communal selfishness.”

We must make every effort to flee from our self-centered wills, and enter into the “mind of Christ.” Through this struggle, we can overcome our destructive egos, rejecting the parochial view of “the parish as the universe,” and united to Christ, develop a worldview where “the universe as the parish.”

I remember when I lived in Kenya in 1989. At times, I traveled to villages that rarely saw a white person, and in such villages, the children would typically flock around this “wazungoo” (this white man). In some cases, however, little children who never saw a white person before would cry because they thought I was a ghost! Anyway, one day, a friend of mine put my arm next to his and asked, “Do you know what the difference is between you and me?” As he pointed to the color of our skin he said, “Only this color. What is in our hearts, what is in our souls, what is in our minds, is the same. We are brothers.”

And truly we are! But what about those outside the Orthodox Church – believers and non-believers alike? Can we see them also as part of our own human family? 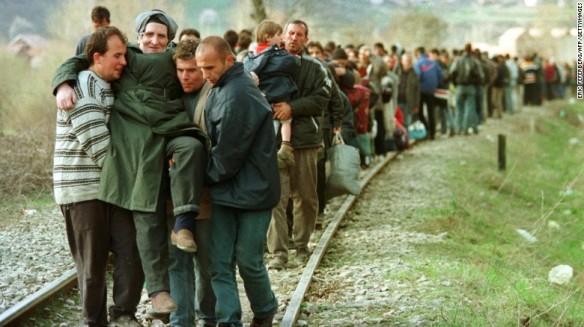 I conclude with a story from my years in Albania. During the Kosovo War in 1999, 500,000 Kosovar refugees flooded into Albania, in total bewilderment and desperation. Many came with nothing but the clothes on their backs. No matter what position they held before – doctors, professionals, businessmen – many fled their homes and instantly entered the category of refugees. One of the blessings of this crisis was how the Church of Albania acted as the hands of God in reaching out to those in need, most of whom were Muslim. We felt so blessed to have the opportunity to offer help – giving food, passing out mattresses, simply visiting the abandoned, the lonely, the angry in the refugee camps.

One week after the war ended, when most of the refugees had returned to their homes, I received a call from a man I met at our Church’s refugee camp. His name was Ramadan, obviously a Muslim. He and his entire family had been touched by the love they witnessed at our camp – from our seminarians who visited there regularly, to our church staff that set up the camp. Ramadan asked to meet me at my office in the Archdiocese. When I saw him, he gave me a big oil painting and said this was a small token of his appreciation for all that the Church had done for him. And then he said something I’ll never forget: “Through the love that you and your students showed us, I came to understand what Christianity is all about. You visited us. You sat with us. You helped us both materially and spiritually. Although I have seen terrible evil these past months, I have also witnessed the beauty of God’s love through you, his followers.”

From this experience I realized more than ever that we truly are God’s presence in the world! If we truly want people to be aware of our Lord, then we have to be ready to reach out among them, and love each one of them.

“My parish is my universe? Or “The universe is my parish!” For Orthodox Christians, the answer should be obvious!