In the name of the Father, and of the Son, and of the Holy Spirit. Amen. Beloved in the Lord, As I was preparing this sermon for this wonderful Sunday in the 5th Week of Great Lent, I was reminded of an old negro spiritual:

Go down, Moses, way down in Egypt land.
Tell ole’ Pharoah to let my people go.

The land of Egypt. In ancient times, this land served as a symbol of luxury and indulgence, even for the thousands of slaves she employed to make these rich services possible. When Moses and his brother Aaron (whose memory we commemorate today) sought at God’s command to deliver his people from their bondage to Pharaoh, they were reluctant, preferring the comfort of Egypt’s fleshpots to the freedom offered by Almighty God.

Today we remember a woman who was similarly bound by the temptations and desires of Egypt. A resident of Alexandria, the “sin city” of the 4th century, Mary of Egypt was no ordinary harlot; she was a celebrity among sinners, an advertisement for iniquity, and a prostitute so taken with her perverted art that she refused to charge for her services. For 17 long years, she sought only to enslave and to be enslaved by as many lovers as she could and paid almost no attention to the growing depravity within. W

hen Mary grew restless with her dead-end lifestyle at 29 years of age she traveled by ship on an exodus from the land of Egypt to the holy land of Jerusalem. By divine providence, she arrived at the Church of the Holy Sepulchre, the very site of Our Lord’s Resurrection from the dead, on the Feast of the Exaltation of the precious and life-giving cross. On approaching the church which bore the cross of our Lord, she was overcome by a desire of another kind: a thirst for holiness and a different way of life. But she was forbidden from entering the temple by a mysterious force. Wanting communion with the living God more than anything else she ever desired, this desperate harlot turned to the icon of the Most Holy Mother of God displayed over the entrance and begged her for assistance. Then She Who is Quick to Hear gave her instantly the desired help and the force which once hindered her, now cleared the way for her entry. Venerating the life-giving wood of the cross, Mary of Egypt resolved then and there to follow the path of repentance for the rest of her life. 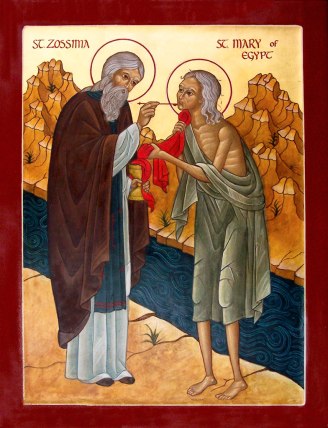 A voice instructed her to cross the streams of the Jordan River where she was to find glorious rest by wandering in the desert. Mary took very little food and water and for another 17 years, through prayer and repentance, undid the life of sin that she so recklessly created. By the end of her life at 80+ years, Mother Mary had turned from a profligate sinner into a flaming torch of righteousness, a clairvoyant eldress who read thoughts, and a spiritual athlete whose prayers and concern for the world flew uninhibited by time and space. No wonder that she terrified and amazed the middle-aged Elder Zosimas when he first met her and witnessed her edifying life. Indeed, it says in St. Mary’s life that this priest-monk:

“… began to be tormented with the thought that he was perfect in everything and needed no instruction from anyone, saying to himself mentally, “Is there a monk on earth who can be of use to me and show me a kind of asceticism that I have not accomplished? Is there a man to be found in the desert who has surpassed me?”

This passage is just dripping with dramatic irony. You can almost hear the Holy Spirit respond to the elder’s thoughts, “No, dear elder, there isn’t a man to be found who has surpassed you. But there is a wo-man. And I am going to introduce you two.” But we can understand the Elder’s amazement, right? How could a woman so far gone in sin turn into such a saint? 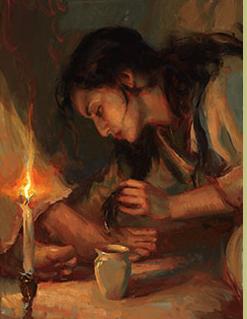 In this morning’s Gospel, we meet the model or archetype for this desperate, but complete turn to Christ for mercy. Tradition identifies the woman of Luke’s account who was “caught in many sins” and disrupts the Lord’s meeting with Simon the Pharisee as none other than Mary Magdalene. In this morning’s passage, it is clear that Jesus does not view her shocking actions the same way as his host. You will recall that this Mary barged into the meeting unannounced and went straight to the Lord, not looking him in the eye, but falling to the ground, she started kissing and anointing his feet, wiping them dry with her hair. We read the thoughts of Simon and they are similar to the tempting thoughts of Elder Zosimas. Simon says to himself:

This Man, if He were a prophet, would know who and what manner of woman this is who is touching Him, for she is a sinner. (Luke 7:39)

Notice how he questions both the Lord’s credibility as a prophet along with his judgment, allowing a woman of such a reputation like Mary Magdalene to perform such an intimate service. But the Great Physician of our souls makes it clear to Simon the real reason for accepting his dinner invitation, and it was not to hobnob with the self-righteous. St. Ephraim the Syrian writes:

Our Lord worked wonders with common things so that we would know the things that those who scorn wonders are deprived of knowing. If such healing as this was snatched from his hem in secret, he was most certainly capable of the healing that his word worked in public. If impure lips became holy by kissing his feet, how much holier would pure lips become by kissing his mouth?… The One who fills the hungry was not invited because of his stomach. The One who justifies sinners invited himself because of the sinful woman’s repentance. (quoted in Ancient Christian Commentary Series, vol. 3 on Luke, p. 127)

Like Mary of Egypt, what St. Mary Magdalene achieved by her repentance far outstripped the meager virtue of her accusers. For the same Lord that humbles the proud, but gives grace to the humble (James 4:6) turned both Marys into a model for our own repentance and humbles both of the proud teachers of the law by their discovery of holiness in unexpected places. 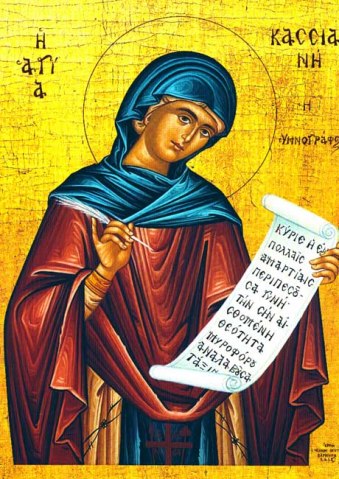 In the very heart of Holy Week, in the glory verse of the aposticha of Great and Holy Wednesday rests a stirring tribute to this harlot turned Equal-to-the-Apostles. The hymn by Nun Kassiani is the culmination of a contrast played out on the day of the Lord’s betrayal by Judas; the contrast is set between the evil disciple and the repentant harlot. The traitor Judas Iscariot who had everything going for him outwardly allowed an inward corruption to grow until he betrayed the very Lord of Glory. Whereas Mary Magdalene, despised and rejected of men spent everything she owned on the myrrh that she used to annoint the Lord for his burial. St. Kassiani in her beautiful hymn reveals the inner psychology of this great moment of repentance:

O Lord God, the woman who had fallen into many sins,
having perceived Thy divinity received the rank of ointment-bearer,
offering Thee spices before Thy burial wailing and crying:
“Woe is me, for the love of adultery and sin hath given me a dark and moonless night; accept the fountains of my tears
O Thou Who drawest the waters of the sea by the clouds
Incline Thou to the sigh of my heart
O Thou Who didst bend the heavens
By Thine inapprehensible condescension;
I will kiss Thy pure feet and I will wipe them with my tresses.
I will kiss Thy feet Whose tread when it fell on the ears of Eve in Paradise
Dismayed her so that she did hide herself because of fear.
Who then shall examine the multitude of my sin and the depth of Thy judgment? Wherefore, O my Saviour and the Deliverer of my soul turn not away from Thy handmaiden O Thou of boundless mercy. (Doxasticon at the Aposticha of Great and Holy Wednesday)

Where are you in this morning’s Gospel and in the lives of these two Marys? Are you like the pharisee or the holy elder Zosimas? Have you grown tired and maybe even a little presumptuous of the Lenten disciplines of fasting and prayer, thinking you have achieved so much and already arrived at perfection? Then remember the Lord’s rebuke to Simon: Things are not what they seem; stop judging by mere appearance and make a right judgment. Or do you feel instead like our blessed Mother Mary? At the doors of our Holy Mother the Church on the brink of salvation, but prevented from going in by some apprehension or opposing force that you can’t seem to shake? Well then, cry out to the Most Holy Mother of God and all the saints for HELP and learn that Our Lord desires not the death of sinners, but rather that they turn from their wickedness and live. (Ezekiel 33:11) And when you do, not even the legendary fleshpots of Egypt will be strong enough to hold you back.

This evening on this 5th and last Sunday of Great Lent, I encourage you to take a pilgrimage. Yes and bring a friend with you, for that is the purpose of our Sunday Missions Vespers: to reach out and share the Gospel with those in need of salvation. Tonight we gather at St. Nicholas Orthodox Church in Auburn, NY, the famous resting place of yet another great and righteous woman, Harriet Tubman Davis, an African-American slave turned liberator who earned the title, “Moses of her people”. While Mary of Egypt crossed the literal Jordan River into the freedom of the desert, Harriet crossed the figurative Jordan out of the Egypt of southern slavery into the promised land of northern freedom. With God’s help and by her fervent supplication to Him, she was able to say about her work: “I was the conductor of the Underground Railroad for eight years, and I can say what most conductors can’t say — I never ran my train off the track and I never lost a passenger.” So come a little early before the vespers at 6pm and visit both her house on the outskirts of town and her grave at Fort Hill Cemetery. And thank God for all who have been delivered out of their bonadage to Egypt, both literal and figurative. Amen.