Today is day 2 of our extended family visiting from Surgut: our cousin with her four children and us with our five. With three adults and nine children, we have turned our three room apartment into a kind of kommunalka, a living arrangement from Soviet times in which several families/individuals shared a common kitchen and bathing facilities. That’s all it takes is for one of these nine children (ages 3-17) to start loosing their cool and the whole household can become unbearable. 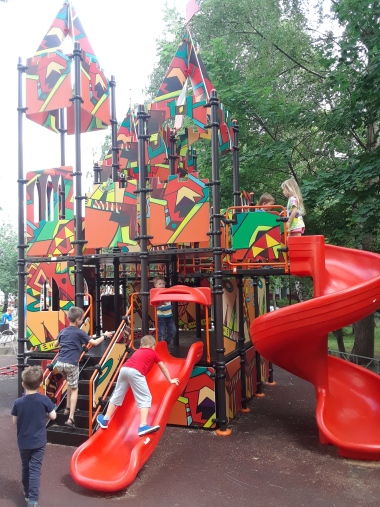 Thankfully, the public transit system is excellent and the park system keeps getting better and better, so there are good peripheral spaces when the kids start feeling like caged animals. When the rain starts falling, there are good kid’s libraries and even some inside playgrounds in the shopping spaces. The 25% increase of large families in Moscow in the last six+ years means an increase of playmates on the playground. A large castle-like structure is a local favorite for us. There is something magical about a circular slide that inspires all kinds of chasing games.

Many people in America have a strong yearning for such community but without success. We build bigger and bigger houses to be lived in by less and less people. We want community, the benefits of being in communion with other human beings but fail to pay the price of co-suffering. We want an i-community: a user-created, customized experience that maximizes our pleasure and choice and minimizes sacrifice. But real community especially in families is never this easy, convenient, or orderly. Real community is messy, a constant give-and-take involving sacrifice in which pleasure may be planned but more often than not, it comes as a surprising result of hard work.

Family life is hard enough; bringing two large families together seems almost impossible. But by God’s grace and with much patience, a beautiful symphony can arise from this co-mingling as parents compare notes on child rearing and each makes honest self-assessments. 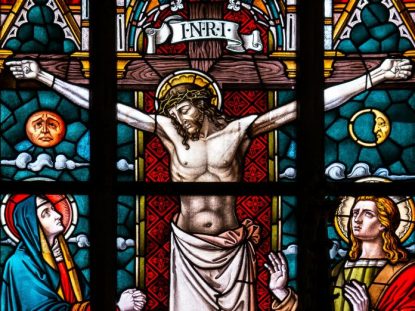 I never studied communism very closely, but from what I understand it was an attempt at the kind of community described in the Book of Acts: from each according to his ability, to each according to his need. But as noble as this sounds, without the suffering, yet triumphant servant of Our Lord Jesus Christ as head, the system ultimately degenerates into simple mass conglomeration of possessions and very little redistribution of that wealth to those who need it most. Community does not arise merely from conglomeration. Community comes from being in communion, joined one to another through a common head, all the parts of the body in union together.

May all the saints who in ages past, present, and future form a choir of praise to the One God in heaven testify to the holy community possible through communion in the one body of Christ. And may He who rose from the dead, ascended into heaven and is seated at the right hand of the Father give us strength in our struggle for such community!

1 thought on “From Communism to Community”